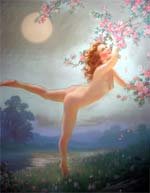 The month of April is definitely a month for Merlots. Tomorrow, April 8, brings Washington Wine Commission’s Taste Washington wine festival in Seattle. Many events are sold out, but there is still room for “Confessions of a Winemaker” at 9 am, in which Walla Walla winemakers, Caleb Foster of Buty Winery, Chuck Reininger of Reininger Winery and other Washington winemakers will talk about their adventures in winemaking.

Tomorrow afternoon “Tasting with the Masters” rounds out the afternoon as guests will enjoy a seated blind tasting of Washington and other world class Merlots led by a panel of Master Sommeliers, Masters of Wine, and wine editors.

Earlier I posted about NW Palate magazine recommending some great Walla Walla Merlot's, so my "April Cherry Pick" is one of those Merlots. Canoe Ridge Merlot 2002 was produced in 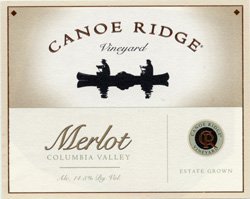 small lots, which allowed the winemaker to acquire the true expressions of the vineyard. A variety of fermentation practices, yeast strains, barrel coopers (85% French for 20 months), along with 23% Cabernet Sauvignon to give it extra body and 2% Cabernet Franc to make it interesting, all of the above resulted in a elegant and classic Merlot. A minimum of fining and filtration, this velvety wine has flavors of raspberry, black cherry and chocolate. The balanced acids makes it a perfect pairing for fatty meats and fish such as game and salmon. I think a redux of this Merlot over meat and garlic smashed red potatoes would be delicious.

This affordable wine, at $25, is getting noticed by winning a silver medal at the 2006 San Francisco Chronicle Wine Competition, and a gold at the Grand Harvest Awards