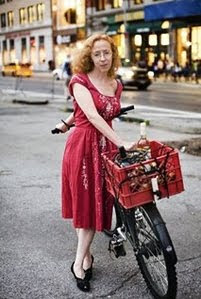 Tiny in stature, but certainly not on opinions, Alice Feiring is a wine journalist, author and one of the leading advocates of natural wine in the USA. Wednesday evening, Walla Walla had the great experience of listening to Alice speak at Whitman College. And many thanks to Professor Kevin Pogue of the Geology Department and the Lecture Series for making it possible.

Many may know Alice from her controversial book, The Battle for Wine and Love: or How I Saved the World from Parkerization Since the release of her book, Alice has added to the fans she already had through her blog, Veritas In Vino and also added some critics to her list.

It was a pleasure for me to visit with Alice before she went up to the lectern. She was genuine and warm. We mostly discussed her visit to Walla Walla and the politics of wine blogging. Alice started her wine blog in 2004 (I started a year later) when wine blogging was still very much a "man's world." Watching her mannerisms, they were very delicate and ethereal and she even curtsied at the end of her speech. There was a sense of

shyness about her and I thought to myself, "This cannot be the same woman who was kicked out of Mark Squire's Forum - - I mean, Robert Parker's Forum."

So you might wonder, "How did Alice save the world from Parkerization?" The New World has been accused by many of pandering to Robert Parker's palate, which often means "manipulating" and following a "recipe" to get Parker's palate all twitterpated. After all, a "twitterpated Parker palate" (say that three times) can often bring high scores. It can also be a double-edge sword if it means losing the expression of the terroir.

Seconds before Alice took the stage, I looked behind me and saw the auditorium was filled with WWCC Eno/Vit students, winemakers and vineyardists. Something told me before the end of the evening, "feathers would be ruffled." Or is that vines would be shaken and leaves would be ruffled?

Alice Feiring believes in the natural wine movement, such as organic and biodynamic wines. Alice prefers wines that have not been "manipulated" by man, even down to the irrigation (I knew the irrigation comment was going to get some reactions from the audience - and I was right!) She feels that wines are manipulated by irrigation when we water and then stress out the grape. Water should only be used to keep a vine alive or when newly planted, says Alice, pointing out the vineyards in the Sinai Peninsula.

Of course, it is no secret that some New World wines have been "manipulated" by oak, adding acids to over-ripe grapes, using packaged yeasts instead of "wild yeasts", adding water to correct sugars, and even reverse osmosis removal of alcohol. She even suggested that stirring of the lees in white wines was a manipulation.

Do I agree with everything Alice had to say. No, but it was certainly good food for thought. Alice says oak is to be used as a vessel and not for flavor. I can appreciate the use of the vessel, but I will admit that I enjoy "vanillans" in merlot and cabernet sauvignon, yet I hate "getting run over by a logging truck of oak" in white wines.

This is the second visit to Walla Walla for Alice. She was here in 2004 and this week she returned to several of the vineyards and wineries she visited back then. She mentioned in Washington State we still haven't defined our terroir. I think that is true when you consider how extreme in climate and soil the state of Washington is. But she did say, the closest wine she has tasted to being Washington terroir was the wines from Cayuse Vineyards in Walla Walla AVA.

When I left the auditorium lobby I was wishing I was a little mouse in the pockets of the winemakers and vineyardist who were possibly rebutting what Alice had to say. I love these kind of discussions and I love hearing both sides, because I feel there is no wrong or right. Let me say this, I think all Alice really wants is for consumers to think about the next bottle of wine they purchase. And I think Alice wants winemakers and vineyard owners to think about their next vintage and how they can make it more expressive of the terroir.

And when it is all said and done, for better or worse, we all want the same wines that "Appellation Feiring" wants (from her blog): " ... I want my wines to tell a good story. I want them natural and most of all, like my dear friends, I want them to speak the truth even if we argue. ... those who love the differences in each vintage, who abhor homogenization, who want wines that make them smile, think, laugh,and feel sexy."
Posted by wild walla walla wine woman at 5:12 PM

A very nice and even-handed report, Catie. I think Alice goes overboard (stirring the lees is no more manipulation than travasage) and gets a bit strident at times in print, but in person she is charming and winsome.

You're probably right, though, when you state that, in the end, she probably just wants people to think about the wine they're drinking.

After reading Alice's book, I came away more enlightened about wine, especially from her historical overview of non-interventionist practices that existed before "modern" winemaking came into vogue. Regardless of your position on preferred approach, there is much to learn from this book.

Also, while Alice and others blame modern wine's faults on Parker, I have come to the realization that it's mostly a result of consumer demand, specifically the American palate's preference for sweetness (Randall Grahm covers this well in his book, "Been Doon So Long"). Parker merely steered the way, with consumers following and winemakers supporting.

Thanks for sharing your experience with us.

Thanks Terence and Thad for checking in and also for your kind words.

I must say though I don't always agree with a "preferred approach" when it comes to winemaking. Of course, I would prefer to see more terroir driven wines. I love the romance behind terroir. However, I can't begrudge a winemaker for "manipulation" of a vintage, especially if it is done out of financial reasons to save the vintage and of course, giving the wine consumer what they want.
C~

Catie, If Alice's idea of true Washington terroir is Cayuse, someone should show her a map. Those grapes come from Oregon. I don't suppose Alice cares for such mediocre wines as Betz, Buty, Rulo, etc. etc. Too much "intervention"...

Oh come on Paul, what's a few miles and a border line? Heh. I think wines like Buty and Rulo, in particular, are some of the least "intervened" wines around and respect the terroirs they are given. But,that was your point.