We've heard of "Fusion Cuisine," the trend of cuisine that combines elements of different culinary traditions. Wine fusion? Jacob's Creek is Australia's largest wine brand, and one of the oldest Australian wineries since 1847.  Jacob’s Creek Chief Winemaker, Bernard Hickin reached out 7,982 miles crossing the equator from Barossa Valley, South Australia to Napa Valley, California, USA procuring Ehren Jordan,  2008 San Francisco Chronicle's Winemaker of the Year. So together, winemakers, Hicklin and Jordan created a "fusion" using the handcrafted artistry of a boutique California winery and the senior vineyards of Jacob’s Creek.

This new wine, "Two Lands" was "fused" to over-deliver on price point, yet bringing together the best of these New World wine areas - - it's a California expression using Australian wine. 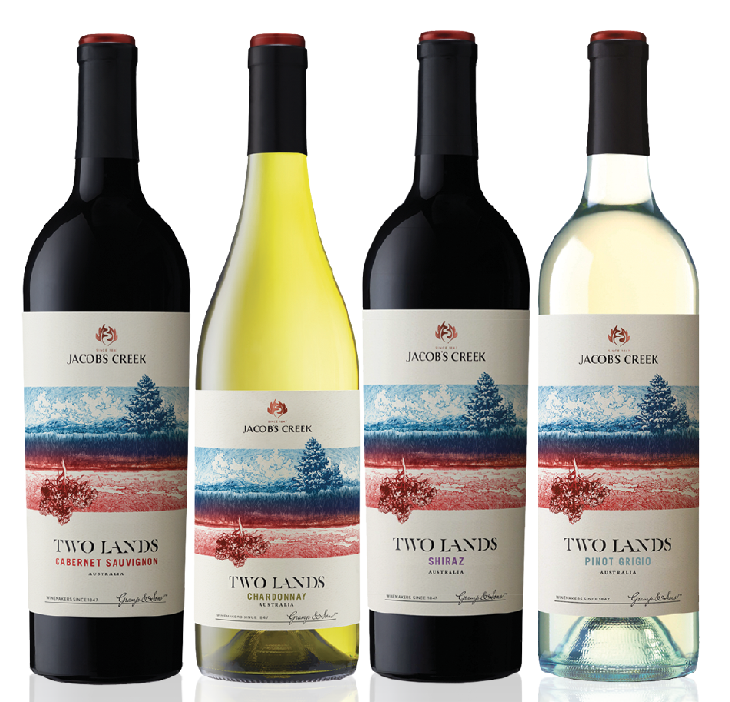 Two Lands Pinot Grigio - 2014: The palest of yellow in the glass, and a perfect summer wine. The winemakers chose to pick late in the Australian season (April) to get the ripest fruit possible. The nose is fresh, zesty, and lemony. The wine has a bit of an oily mouth feel, yet crisp, lemony, and refreshing. Just a kiss of oak, as the winemakers chose to use older barrels. How would I pair this wine? A rich clam or salmon chowder, my favorite clam linguine sauce (and maybe toss some of the wine in the buttery sauce), and even fish & chips.

Two Lands Chardonnay - 2014: It's bold in the color of yellow, but light in body. Rainfall was higher this year around the Limestone Coast zone where these grapes were grown. The result left them with a low yield in fruit, but high in quality. The nose expresses exotic tropical fruit. The taste on the palate is that of peaches, honey dew and cantaloupe. There was also just a hint of residual sugar, which makes it easy for a newer group of learning wine lovers. I would pair this as a picnic wine, serving chicken salad sandwiches, salted nuts, and a fresh fruit salad.

Two Lands Cabernet Sauvignon - 2013: It was a year of high temps and low rainfall in the southern Australia. It meant low yields, but exceptional quality. Fruit picked in the late season on purpose for soft tannins and ripe flavors. Lots of dark ripe bramble berries on the nose. On the palate it was more berries, cherries, plums, and a light spice in the finish. Due to there is still a bit of ripeness in this wine, I would consider sipping it on the porch with maybe a wedge of blue cheese, and pair it with anything hearty from a big juicy burger to even Julia Child's boeuf bourguignon.

Two Lands Shiraz - 2013: Yup, this is a Australian Shiraz, in spite of the touch of California flair.  You cannot get around it. Big! Ripe! Black and almost inky in the glass. Blueberry and blackberry jam, with a little bit of smoky bacon on the nose. It finished with a bit of nutmeg and lots of black pepper. This is a wine that is meant for the Australian "barbie." Grilled meats such as burgers, steaks, ribs, and even grilled vegetables of zucchini, eggplant, portabello mushrooms, and peppers would be perfect with this wine.

At this time there are four wines in their Two Lands wine portfolio. Their wines are affordable for the American market, and priced under $15.00 (US). Two Lands can be found now in markets in the United States. While affordable, the labels are very beautiful with detailed illustration. Please see the video to watch the illustration.

Posted by wild walla walla wine woman at 8:19 AM 2 comments:

There were a couple of years when I missed Feast Walla Walla, and several years when I had a  press pass and "worked" the venue by taking notes and videos. This is the first year when I was on "my own" and it was fun to relax, sip some good wine, visit with friends, and sample many goodies.

Feast Walla Walla is always a great venue and the magic happens on First Avenue downtown Walla Walla at Main Street. The gigantic white tent begins to take shape Friday evening and by Saturday morning, it can pack up to 600 people and several food and wine purveyors. The excitement begins at the tent entrance when guests receive an etched wine glass commemorating the event, a souvenir plate to hold the "feast" from local food vendors and 10 tokens to be used towards food and wine.

So let's cut to the chase. Some of the highlights for me was it didn't seem as crowded this year, therefore I didn't feel as "squished."  I am not sure if it was due to less people or larger space. I will also take the time to talk about some of my favorite food. Of course, one must not leave without dropping a token to get a little bag of chocolate truffles from Bright's Candies.

The Marc Restaurant at the Marcus Whitman Hotel and Conference Center, of course didn't disappoint with their selection of food. They served bites of local Walla Walla pickled asparagus rolled with house-cured prosciutto. Oh my! The Marc also served a bite of dessert with a Parisian-style milk chocolate, hazelnut, and apricot macaroon. Beautifully done.

Sapolil Cellars really thought their presentation through ... (a hint to other wineries who serve food - - pair food and wine) ... Chef Peyton of Sapolil Cellars presented little bites of deliciousness that paired so well with their Sapolil "Dwelley" Reserve - 2009 (red blend). The bites were Sapolil "Dwelley" Syrah-infused salami chips topped with roasted garlic, goat cheese, and pickled red onion. I kept going back for more.

Chef Paul and crew from the Bank & Grill Catering Co are usually one of the most popular booths and nothing has changed. I chose a crostini, spread with a blue cheese compound butter and topped with hand-carved beef steak from their generous platter of grilled meat.

I wished I could have visited more winery booths than I had, but one must be responsible ... I sipped on Henry Earl Estate Riesling - 2013 and Henry Earl Estate "Homesteader" (red blend),  Kontos Merlot - 2010, Plumb Cellars "Damn Straight" (red blend), Plumb Cellars Viognier, SYZYGY Syrah - 2009, Waterbrook Winery Sangiovese Rose, and Dunham Cellars Riesling.  None of these wines disappointed. All very lovely, and especially paired with food - - which leads me to this suggestion ...

Now, this event is called "Feast," right?  I had a revelation but I think every winery and food booths need to be more conscientious of food and wine pairings and seek out each other.  I am always thinking about menus and wine pairings.

So, I had a few wooden coins leftover and asked a suggestion of a friend on how to spend some of my last wooden coins. He mentioned to check out Marcy's booth and get a pulled pork slider with sweet and spicy coleslaw on a brioche bun - - and just as important, he told me, was to pair it with the Dunham Cellars Riesling.

If I could make a suggestion to the Downtown Walla Walla Feast Team who worked hard on  another great year of Feast Walla Walla, would be to suggest to their vendors to think more about food and wine pairings, and also a little music was needed. Nothing loud, but perhaps a little light jazz or a string quartet at the very back of the tent at Alder Street - - for just that little hint of ambiance.  Or perhaps to even have a band or some kind of a interesting performer outside the front entrance to capture the attention of others who you might be able to sell a last minute ticket to.

I hope that many other people who attended Feast Walla Walla also continued to stay downtown Walla Walla, after Feast closed,  and enjoy the many things that were going on. We sure did, as we visited Sapolil Cellars to listen to music and hoping to snack on their remaining salami chips (Yup, we scored!), as well as we later visited winemaker Cameron and super-duper tasting room woman, Brianna at Kontos Cellars to sip on  their Malbec and listen to their visiting band. And a good time was had by all ...