"Something happens to people who love wine. You really discover a camaraderie. It’s not like coin collecting or something cynical. It’s like sharing love in a glass." --- Park B. Smith.

I believe there are only four major food groups and just like my name, they all begin with the letter, "C" - Cabernet, Cheese, Chocolate, and Coffee. 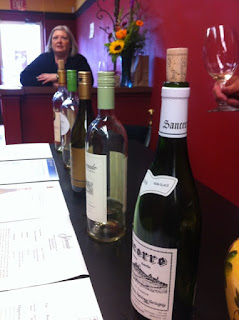 I was born and raised in Walla Walla, WA and I am the original Walla Walla wine blogger - - and still standing since 2005. I was lucky enough to be blessed with the fermentation gene that traces back in my father’s family many generations. Sure, every family has skeletons in their closet. Our skeletons come from making moonshine in the hills and hollers of West Virginia.

My father made home-brew beer in the 1950s decades before micro-brews became a hot trend, and he made his own wine from Grandma’s backyard grapes. My first fermentation project came at age 18: four cans of fruit cocktail, several cups of sugar, and a couple packages of yeast. The molten sweet fruit bubbled and churned and eventually - voila! - I had "brandied" fruit, and even though it made the eyes water it tasted oh so good. A few years after that success I tried my hand at wine, making what I named "Freaked Out Hippie Wine." The label starred a peace symbol.

We were taught to respect fermented beverages and not to drink outside the home. When family and cherished friends came to visit, my father would bring out his very best. In spite of the parental lectures, I thought I was quite worldly when sipping my first wine outside of my parent's home. That happened at a Maria Muldaur concert ("Midnight at the Oasis, send your camel to bed..."). I sipped from a large green bottle of Spanada that was passed up and down the row of seats in the same way we used to share other things with fellow concert-goers. Early on I discovered I had a very sophisticated palate. Boones Farm Strawberry Hill tasted simply awful to me; I always favored Annie Green Springs - Peach Creek.

Over the past 35 years, as the number of wineries and vineyards in Washington grew from near zero to more than 500, my interest in vitis vinifera got piqued. I went to wine festivals and toured wineries across the state, mostly sipping Merlots and Rieslings. In the 1980s I visited Napa Valley and developed a taste for Cabernet Sauvignon. In the ‘90s I visited the Hunter Valley region in Australia and became very fond of Shiraz/Syrah while down under. Later, I made more trips to the Bay Area in California and learned to love the ripe, spicy Zinfandels made from old-vine vineyards planted decades ago.

By this time my tastes had influenced even my experiences at concerts. Crosby, Stills and Nash, for example, pair superbly with a dense, complex, blackberry and cocoa-layered Cabernet Sauvignon from Washington State.

Appreciating wine encompasses much more than the romance of wine and the pleasures of the taste. It includes understanding everything that went into a bottle of wine, from the terroir that influenced the vine and its grapes to the craft and dedication of the winemaker. I have spent more than ten years in wine sales and merchandising and participated in many aspects of winemaking, from grafting Merlot clones on rootstock, planting a row of Merlot in a vineyard, working the autumnal crush, and onto the finished product bottled by hand, as well as working the automated bottling line.

Besides my studies in enology/viticulture, and a graduate of the Enology/Viticulture Institute of Walla Walla, I have also taken courses in web design and retail, especially e-commerce with an emphasis in wine. I have toured many vineyards to understand the terroir that is only unique to those various appellations. I have participated as a judge for the annual Northwest Wine Summit, Idaho Wine Competition at the Snake River AVA, 30th Annual 2011 Washington State Wine Competition and the 31st Annual 2012 Washington Wine Competition.

Author of my first book, Wines of Walla Walla Valley:A Deep-Rooted History, published by the History Press in 2014.  In August of 2018, my second history book The Lost Restaurants of Walla Walla was released.

Also, as of 2018, I have been dabbling in a bit of fiction. Follow the series of Witch Way to Amethyst Bay. Book Two will be launched in 2019. Of course, my characters drink a lot of wine from Washington and Oregon States.

After eight years of working in the tasting room environment cleaning spit buckets and pouring for the masses, as well as retailing wine online and brick and mortar from December, 2007- December, 2014, I hung up my corkscrew to pursue my writing. Let me share the stories of the Walla Walla vines and wines (and sometimes the World) with you.