Once upon a time in the valley of Walla Walla there were three very thirsty amigos. Unfortunately, wine was not always within their reach. Rob Chowanietz and Crandall Kyle were raised in ultra-religious environments where alcohol was strictly forbidden. Not necessarily raised in a religious household, but attended church in her youth, Jeanie Inglis-Chowanietz would pass the time away by dreaming of wine coming out of the bathtub faucet.

Rob and Crandall finally discovered the joys of fermented grape juice while waiting tables at the local country club, 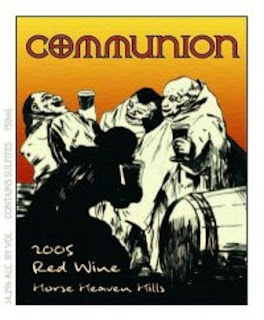 where they would indulge in half-empty bottles of expensive wine left over from wedding receptions. And Jeanie couldn’t get enough of the real wine her church used during communion. Is the rest history or is history to be made?

Over a decade ago, when the Walla Walla wine industry was in her youth, you could find these three amigos all over the Walla Walla Valley. Rob was being guided by long time friend and mentor John Abbott, former winemaker for Canoe Ridge Vineyard (John is now at Abeja) and later Rob could be found as the cellar master for Woodward Canyon. Jeanie started her wine career in Walla Walla as the manager for Waterbrook Winery’s wine club and as PR director for Cayuse Vineyard. Crandall started his wine career doing books for L’Ecole No. 41 and later for Canoe Ridge Vineyard. And to this day he is still doing the numbers for Dunham Cellars. By day, Jeanie has moved onto her own wine consulting business and Rob is now winemaker for the Corus Estates and Vineyards in Sunnyside, WA. But by night and weekends - - all three of these amigos turn into - - Thirsty Pagans!

What started as a garage wine (isn’t that the way with most thirsty pagans - - hiding in garages?) is now being released to the public! Shriek! Gasp! Hide the children! Hold me mommy! Thirsty Pagan’s first release, Communion Red - 2005 is a fine blend of 75% Cabernet Sauvignon, 15% Merlot, 5% Malbec and 5% Petit Verdot. All of the fruit for this rich blend is from the Alder Ridge Vineyard in the Horse Heaven Hills with the vineyard overlooking the Columbia River. With the help of Mother Nature, Rob is thoroughly involved from vine to the wine. But have no fear o' righteous ones, as the Thirsty Pagans do not have any plans to take over the world. The wine rests 22-months on 100% French oak and then another 12-months in the bottle. Small lots and producing only 250 cases annually makes it a no-brainer for these Thirsty Pagans to implement a screw cap, while leaving the risk of faulty corks behind them.

And now as we are near the end of our tale, how does Communion Red taste? Holy alter boy! This ain’t yo’ typical watered down fermented grape juice! The color is red and rich as the color of - - well - - Red Cross bag of blood! A nose of cherries, sage, and rock welcomes the nose followed by flavors of dark ripe cherries, brown sugar and concentrated dried cranberries. Spicy notes, yet smooth tannins satisfy the tongue while leaving just an edge of the ol’ smoky cigar box.

So, open your mind and take a walk to the "other "side. The other side holds the promise of a great wine for a great price of $26 a bottle - - so get into the holy habit!
Posted by wild walla walla wine woman at 7:52 AM 2 comments: 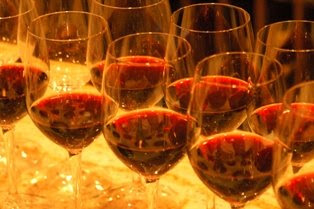 According to the American Food Holiday website today is National Drink Wine Day!

It stands to reason that we have a national day for wine. I mean, what or who doesn't have a day notched on the calendar just for themselves. Unlike Valentine's Day, Bosses Day, etc there are no Hallmark greeting cards that we have to get sucked into buying to show our appreciation - - at least not yet. And while this national "holiday" was more than likely done in the spirit of other randomly assigned "holidays" desiginated by some low-level politicians. You know the kind - - done in an effort to appease "influential" special interest groups? And if in fact this is one of those "holidays," finally they have designated one that I can wrap my mind (and lips) around.

And how does one celebrate National Drink Wine Day? Ummm - - if you have to ask, then perhaps you should forget it and hold out another year for National Milk Day on January 11.
Posted by wild walla walla wine woman at 7:54 AM 2 comments:

No Grapes Were Harmed: Bottle Shock!

Almost a year after I interviewed actor Hal B. Klein, who played Bottle Shock's scruffy cellar rat "Shenky," I finally had an opportunity to see the movie. It pleases me to say if I am asked, "Which Hollywood wine movie did you prefer, Bottle Shock or Sideways?" My answer will be Bottle Shock. And let me explain why.

It's not that I didn't enjoy the movie, Sideways because I did. But the most important reason why I preferred Bottle Shock over Sideways was:
No grapes were harmed during the making of this movie.
Unlike the movie Sideways, Bottle Shock will not alter much of the buying habits of wine consumers, especially the buying habits of the wine newbie. This time the wine consumers will not be overlooking well made fine Merlots and turning towards cheap high volumed produced Pinot Noirs - not understanding that all Merlots and all Pinot Noirs are not created equal. Hopefully, the movie Bottle Shock will dance upon the tiny heads that are tattoed with "ABC" (Anything But Chardonnay) and those who hiss from their lips, "We only drink redsss" will open their minds to giving great American made Chardonnays a second chance.

For the most part, we are seeing American winemakers leaving behind the trends of diacetyl enriched butter bombs and forest-filled oak monsters in their Chardonnays. At least from my experience, I am tasting more crisp, fruit-forward and food friendly Chardonnays from the state of Washington, especially from the Walla Walla Valley, than ever before. And frankly, in spite of the French losing out in the 1976 Judgement of Paris with their Batard Montrachet and Meursault-Charmes, it is my opinion that the well balanced and harmonious Chardonnays coming out of Washington State are very much influenced by our own "French Touch - the growing number of French-born and trained winemakers who have made the state of Washington their home. And just as important, the quality of fruit they are selecting to be used in their craft.
Bottle Shock is a charming fictionalized version that chronicles the real events leading up to the famous Judgment of Paris, unlike the 100% fiction Sideways. The focus is on the non-fictional characters, Jim and Bo Barrett, the real father and son team who owned the winning bottle of wine from Chateau Montelena in California. If you're a bona-fide swirling, sniffing wine geek and haven't seen the movie, don't miss it.
Oh - - and the soundtrack wasn't bad either.
Posted by wild walla walla wine woman at 9:41 PM 2 comments: 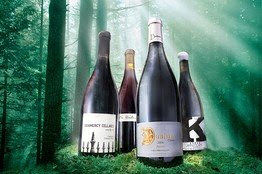 In recent news, Walla Walla may be collecting a boneyard of blood, sweat, tears and old menus from some of the valley restaurants, but it's the Syrahs of Walla Walla that are still alive and kicking! And in spite of this dragging economy, kudos to the Wall Street Journal and their article, Gorgeous Giants of the Northwest for recognizing some of the best Syrahs of Washington state, and especially those from Walla Walla.

The group at Wall Street Journal tasted the Syrahs in blind flights over several nights and were, "blown away." And here's what they had to say:

"When these wines got it right, they were intense experiences, with purple-black color; massive, tightly wound fruit; hints of all kinds of herbs; great acidity; a dark core of fruit that, more than once, made us think of crushed coal; and a genuine sense of excitement."
We salute you, you bad boys of Syrah - Dunham Cellars, Gramercy Cellars, K-Vintners, L'Ecole No. 41 and Reininger. And last but not least, a big salute to you growers of massive, inky, powerful, and slap-your-face fruit: Morrison Lane and Seven Hills Vineyard. Because without the fruit, we'd be just - - mediocre - - ehh.
So, step aside California Zinfandel and bow down. Washington Syrah is here!