In the city of Walla Walla (not including the county of Walla Walla) taco trucks are popping up all over like a frozen corn tortilla on a hot greased griddle. There are at least a dozen that I know of (sometimes they move around a lot so it's hard to keep track.) I never know which one to check out. One person will tell me to stay away from a particular one, while another person will tell me it's the best one in town. Prices are reasonable - $1.00 to $5.00. So far what I have had was delicious! The sauces were the best. 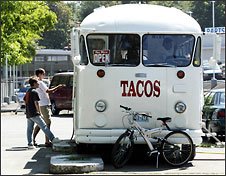 in the valley is La Monarca. It's on Rose street, between 11th and 12th. The old milk truck sits in a gravel parking lot. You will spot it by the Monarch butterflies painted on the truck. Some friends have mentioned that the one by Jefferson Park on Ninth Street is the best and former college student friends have mentioned that the truck parked by John's Wheatland Bakery on Isaacs street is the best. Which one to choose?

There was Dora's at the local worm ranch. Yes. Worm ranch. A place where you buy bait. Dora recently moved to a fancier spot - at the golf course. Now called "Casa Dora." Dora's will never be the same. Good food, but the bait ambiance lost and compromised.

Someday I am going to spend a couple of days checking out all the taco trucks and make my notes. Friend Jamie thinks it would be fun to visit many of the taco trucks and do some local Walla Walla wine pairings with some of the favorites. I am ready!
Posted by wild walla walla wine woman at 5:40 PM

If you want to read more about visitors to the bait shop - check out: