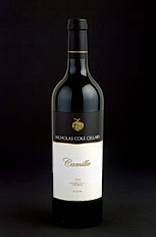 To give you an example of how many of us are connected in the Walla Walla Valley: last month I ran into an old friend at a wine industry mixer. Mike Golden was not only a classmate at the Institute of Viticulture and Enology in Walla Walla, but I was maid of honor at his wedding over 30 years ago! Mike was at the mixer representing Nicholas Cole Cellars and I had an opportunity to taste one of their wines I have been hearing so much about – Camille. I wasn’t disappointed.

2003 was a good year for Washington State grapes and it reflects on Camille. But then again, how could you miss when you have three of the most distinguished Washington State vineyards making up this claret-like blend of 47% Cabernet Sauvignon, 37% Merlot, 15% Cabernet Franc? The diversity of Klipsun Vineyard from Red Mountain, Champoux Vineyard from Horse Heaven Hills and Seven Hills in the Walla Walla Valley gives Camille generous, yet elegant flavors.

The nose reminded me of a box of rich chocolate covered cherries. You know, the good kind with cherry liquor. And the flavors of chocolate and cherries continued onto my palate. A little spice at the end with flavors of anisette and pepper. However, the spice did not seem to overpower the chocolate, but compliment it. Soft tannins and a very silky mouth feel - a wine that is worthy of ageing.

La Donna Legg, who coordinates the Nicholas Cole Cellars wine club, says the new 2004 Camille is awesome and will be released next month at the May Spring Release weekend. Cheers!
Posted by wild walla walla wine woman at 7:26 AM