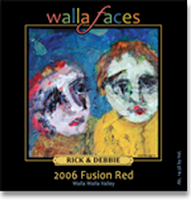 Rick and Debbie, along with Janice and Jane, are the new faces of Walla Walla's Main Street.

As they say, "It all starts in the vineyard." And for Debbie and Rick Johnson, it certainly did. The Walla Faces Vineyard was planted in 1999 by Three Rivers Winery (formerly known as the Ahler Vineyard). In 2006, the Johnson's purchased the Ahler Vineyard, as well as the home site above the vineyard and renamed it Walla Faces Vineyard. Along with a new name, they also brought organic farming practices to the vineyard and of course, with these changes brought a new degree of excellence in the wine.

There are other faces of Walla Faces, such as Matt and also Candice. We'll get to Jane, Janice and more on Rick and Debbie, later. In 2008, Matthew Loso became the winemaker "face" for Walla Faces. Prior to joining Walla Faces he was the founder, owner and winemaker at Matthew Cellars in Woodinville, Washington for 15 years. During that time Matt built a solid reputation in winemaking with many accolades and national wine review publications

Not only have I had the pleasure of visiting with Rick and Debbie, but also the creator of these "Faces," Candice Johnson. Candice is also Rick's sister. Trained as a interior designer, Candice's creativity has brought her to places from Los Angeles to Paris, France. While in Paris she apprenticed under several well know Parisian artists. Her art has been sold and celebrated throughout the world, but it is Walla Walla where she has hung her hat or more like "placed her face." Her faces shows her enthusiam for life, color and a youthful spirit. I also discovered Candice has embraced her own "Wild Walla Walla Wine Woman."

Walla Faces tasting room on Main Street is very comfortable and modern, with memories of the past from the brick walls to the tin ceiling. There are colorful touches of Candice's small portraits around the room, which she refers to as “Tetes” (French meaning heads). And it just so happens 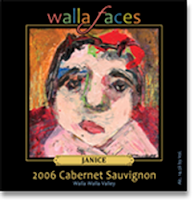 those Tetes are also on the labels. And this is where we will meet Janice and Jane.

Janice is the Face on the Walla Faces Cabernet Sauvignon - 2006. Right up front Janice told me she was a Cabernet with her bold, dark and sassy fruit. Janice is juicy! She is nicely balanced and her tannins are visible, but just enough to tell me she is also worthy of some beauty sleep to turn those tannins into silk. $34.90

Jane is the Face on the Walla Faces Syrah - 2006. This estate Syrah is inky in color. Jane shows off her dark fruit with aromas of Walla Walla's earth and flavors of blueberries and spice and still - there's a lot going on with this wine. Most Jane's I have known do not like to be known for their "fullness" but Jane isn't afraid. She is big! Jane will definitely scream more of her 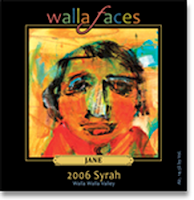 personality after being decanted. An excellent price at $28

Rick and Debbie have been fused together to create Fusion, of course! This Bordeaux-style red blend is a real show off - showing off the terroir of Walla Walla. It is lively with a nose of dark fruit and a bit of the ol' cigar box. The "fusion" of Cabernet, Merlot and Cabernet Franc makes this wine complex - there's a lot going on. Yeah - it's a wine that I could get greedy with and not want to share. $29.90
So, just face it. Stop by and introduce yourself to the new Faces of Walla Walla - Walla Faces.
Posted by wild walla walla wine woman at 4:15 PM

How honored I am that you saw in me a kindred spirit. A "Wild Walla Walla Wine Woman".
Thank you!!

Thanks for the information. I will definitely look to stop by their tasting room.