The Beauty Behind the Buty and the Beast 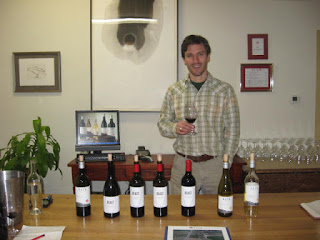 as a winemaking assistant for Woodward Canyon. In 1999, he moved on to become an enologist for Chateau Ste Michelle. The start of the new millennium was a significant one as Caleb traveled down to Marlborough, New Zealand as a production assistant for Foxes Island and Seven Tarraces wines during their 2000 crush. In 2001, the married team of Nina Buty Foster and Caleb Foster created Buty Winery in Walla Walla. Buty Winery produces small cuvees of white and red single vineyard blends from Washington State. Their accolades are many, including two times named as "Wine of the Year" by Seattle Magazine and also by Food & Wine Magazine.

The selection of Buty wines are impressive. Caleb poured a classic Bordeaux-style white blend of Buty 69% Sémillon, 26% Sauvignon Blanc and 5% Muscadelle. I believe this was the first time I had ever tasted a Washington State wine with Muscadelle and I believe this is the first Muscadelle produced in Walla Walla. Caleb described the vineyards that grew these white grapes and from his descriptions I felt as if I was part of the journey. I could even see in my mind's eye the Muscadelle from the Lonesome Springs Ranch and how the fruit was kept fully shaded from the summer sun. The nose on this 2008 white wine was of honeysuckle and the palate was clean, fresh and dry with taste of melons, lemon and a bit of honey.

The cool desert nights created a bright and acidic wine for the Buty Winery Conner Lee Vineyard Chardonnay - 2008. Notes of peaches and green apples picked from the orchard were alive and yet eased into a soft citrus finish. This was my style of Chardonnay - the style that shows off its fruit without being overoaked and cloying of butter.

Phinny Hill in the Horse Heaven Hills AVA holds the secret to the Buty Columbia Rediviva, a blend of 55% Cabernet Sauvignon and 45% Syrah. This 2006 estate blend showcases that Buty was the first Washington state winery to focus a Cabernet Sauvignon/Syrah blends as "deluxe" wines.

The Phinny Hill Vineyard is one of the warmest sites in the state. It's layers of ancient cobblestones and sandy silt-loam soil sits high above the Columbia River, but the chosen blocks remain protected from the high and piercing winds. Cherries, berries, caramel and pepper greeted my nose and palate. This rich inky blend is definitely an age-worthy wine.

The thoughtful name, "Columbia Rediviva" was the name of Captain Robert Gray's ship, the first non-Native American navigator who entered an unnamed river. It was in 1792 Gray gave this powerful river its name, The Columbia. It is the same majestic Columbia River that connects and has contributed to all of the vineyards that Caleb has crafted into his wines.

Enter the BEAST! The BEAST label is the alter ego of Buty. It's that "second self" that allows Buty to explore special one of a kind releases. Every year on Halloween 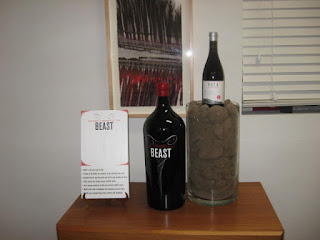 and sometimes on April Fool’s Day, the BEAST releases wines that are not typically in Buty's wine portfolio. To catch a BEAST, you must join the Friends of the BEAST Club. Since BEASTS are known to be elusive and difficult to control, these very limited single vineyard wines move fast! I had a rare opportunity to sample three of the BEASTS - a Syrah, Malbec and a Grenache. Since my tasting, I understand that two of the BEASTS have been tamed and left the building. BEAST Phinny Hill Syrah - 2008 is still available to catch.
In 2006, Nina and Caleb purchased 10 acres of orchards near the Washington/Oregon Border on the Oregon side. They organically prepared the land and planted clones of Syrah, Cabernet Sauvignon, Grenache, Mourvèdre, Marsanne and Roussanne. The venerable cobblestone land, which was part of the old Walla Walla River, gave the estate its name: Rockgarden. The "Rediviva of the Stones" from this vineyard of the Walla Walla Valley are wines to watch for.

These wines spoke "old world" to me. They are aroma driven and well thought out from the soil to the bottle. The wines told me that indeed, Caleb Foster is a winemaker of his word, and not only does he have a relationship with the vineyard owners, but the soil and the vines, as well. And with each new vintage, the contributions of the terroir and the vineyards will continue to create new beautys and new beasts for Buty Winery.
Posted by wild walla walla wine woman at 8:00 PM

Wonderful write up of Caleb and Buty. I would have to agree, their wines are delicious, and I need to go back - SOON! You have made my palette salivate with your descriptions, and I am curious to try their Bordeaux-style wine.

I got my first taste of the Buty White Bordeaux blend at the Walla Walla Trade tasting. It was the most memorable white of the day for me. I was fascinated by the addition of the Muscadelle.
I can't wait to get my hands on a bottle and pair it with oysters!