Revisit Old Friends with Friends: L'Ecole No. 41 Apogee and Perigee

The autumnal equinox is a reminder there is something going on in the sky that is bigger than all of us. It's about the changes of our planets. The sun crosses the celestial equator and moves southward in the northern hemisphere. This year the equinox coincided with a Harvest Moon - - and it was just last week the moon wasn't totally full, but it was hovering above the closest center point of the earth, which is referred to as a Perigee.

You don't have to have a telescope or wait for night to fall to take in a Perigee or even an Apogee (the opposite of Perigee, when the moon is at the greatest distance from the center of the earth). You can visit either celestial occurrence anytime you wish. 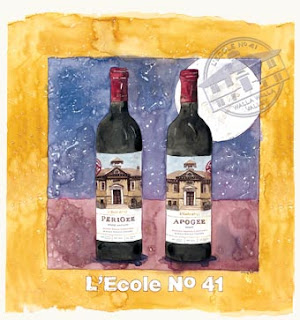 L'Ecole No. 41 Apogee - 2007: This single vineyard red is sourced from the Pepper Bridge Vineyard, known for it's premier fruit throughout the state of Washington. Apogee is a Bordeaux-style wine with a blend of 60% Cabernet Sauvignon, 30% Merlot, 6% Malbec, and 4% Cabernet Franc. Since it's first release in 1993, this proprietary blend has been known for being aromatic with touches of spice, cigar box and the rich earth that is so unique to the Walla Walla Valley. Dark stone fruit of cherry and plum with a hint of black currant cassis rounds out the mouth. No matter the vintage, Apogee has shown to be an exceptional age-worthy wine.
My recent tasting of the Apogee - 2007 was a reminder to me of previous vintages that was shared around memorable and special occasions.
L'Ecole No. 41 Perigee - 2007: Once again, another single vineyard (estate) red, but with fruit sourced from the Seven Hills Vineyard, located just 10 miles south from the Pepper Bridge Vineyard. 60% Cabernet Sauvignon, 30% Merlot, and 10% Cabernet Franc went into this Bordeaux-style blend. The Seven Hills Vineyard was one of the first commercial vineyards in the Walla Walla Valley AVA. It was planted in 1980 and later expanded in 1989. The average elevation is around 900 ft. - - high!
I stuck my nose deep into the glass bowl of Perigee. The nose reminded me of the autumnal air in Walla Walla. It was smoky and earthy. The liquid on my palate was velvety and smooth and almost melted like a rich chocolate-covered cherry. Just a hint of spice to remind me it was there, but finished once again with notes of milk chocolate, cherry cordial and the smell of rich earth. If I had tasted this wine out of town, it would indeed remind me of home - Walla Walla.
I typically don't rate wines, but every so often I will find a wine from the Walla Walla Valley that I will label as "swoon-worthy" and indeed - - Perigee made me swoon. Beautifully done.
Short days with moon-filled nights are slowly announcing themselves. For me, these autumn and winter months are for entertaining, such as holidays and just evenings to "hunker-down" from the winter elements with family and friends. L'Ecole's Apogee and Perigee are wines that are meant for these special evenings.
Posted by wild walla walla wine woman at 10:19 AM