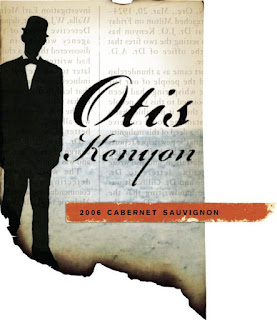 It's been no secret that my go-to-wine is Cabernet Sauvignon, especially a Cabernet from the Walla Walla Valley. Like several wineries in the area, Otis Kenyon's label and story is based on family and their history here in the Walla Walla Valley. Unfortunately, Otis Kenyon's story is a bitter-sweet one filled with tragedy but now the new chapter for the Kenyon Family finally has their happy ending.

The happy ending also happens to be their 2006 Cabernet Sauvignon from the Walla Walla Valley. But let's start at the beginning.

I believe in sharing good bottles of wine with friends. Nothing is better than to pop a cork and pour a good bottle of wine around the room while everyone ponders the colors, the smells and even the atmosphere of the room - the whole experience. I had experienced the Otis Kenyon wines before, so the greedy devil on my shoulder told me not to share the wine as I should have it all to myself. However, it was the angel on the other shoulder that reminded me that good wines are meant to be shared with friends - - and that is exactly what I did when I accepted a dinner invite from my neighbors. (Who later that evening opened a 2002 Leonetti Cellar Merlot to be paired with Steak Oscar topped with asparagus and a tarragon bearnaise with a side of delicate stacked rounds of potatoes gratin. But that's another story ...)

It seems to me that Otis Kenyon releases their wines at later dates instead of releasing a wine that has only had a few years in the bottle, as they just had released the 100% Cabernet Sauvignon 2006 this early summer (Vineyards used: Seven Hills, Pepper Bridge, and Windy Ridge). The wine had time to, of course, potentially improve, rest and meld leaving a dark deep plum color that was rich in aromas. The more we swirled, the nose came alive with notes of blackberry tea, smoke and dark earth. Slow sips brought forth an abundance of dark cocoa, over-ripe plums, brambleberries and just a hint of spice - - like cloves. It was well balanced and we noticed the presence of oak, but it wasn't obtrusive. Later hints of anise and herbs came through at the finish. And like a good story, the wine left us with a happy ending from the first aroma to the last sip.

We took the almost-empty bottle of Otis Kenyon Cabernet Sauvignon to the table and finished it before the dinner wine was opened. I was happy and thankful for such a nice evening of good friends, good food and of course, good wine. I was happy I was able to share a lovely bottle of wine with my friends, but darn it if that greedy little devil on my shoulder later left me wishing I would have had the whole bottle all to myself. Cheers!
Posted by wild walla walla wine woman at 8:00 AM

We've had a chance to spend time with the owners on several occasions and they're the nicest people.. who just happen to make great wine.