Chris Dowsett just didn't wake up one morning and decided to produce Gewürztraminer. This aromatic white wine grape, with Germanic origins, is in his blood. 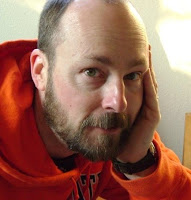 gallons of Gewürztraminer in junior high school. Later, he would put in a few years at Canoe Ridge Vineyard/Winery in Walla Walla and assisted with their Columbia Valley Gewürztraminer. While winemaking at the former winery, Lattitude 46, Chris also produced a dry barrel fermented Gewürztraminer under the Lattitude 46 label. He was at this Touchet, Washington winery until 2007 when he would become winemaker for Artifex Wine Company in Walla Walla. It was there, at this world-class custom crush facility, that Dowsett Family Wines was conceived with its first 300 cases of wine. Chris has since moved on from Artifex, but when Chris isn't producing his own wines, he is also assistant winemaker for Buty Winery.

Dowsett Family Winery is a small production winery with a little over 300 cases a year (around 173 cases of Gewürztraminer and 200 cases of the red Rhone-style blend, "Devotion"), which makes these much sought-after wines rather elusive.

Dowsett Family Gewürztraminer - 2010: From the Celilo Vineyard at Columbia Gorge. This vineyard was planted in 1982 and is dry-farmed. If you want to know what a dry Gewürztraminer should taste like, this wine is a stunning example. This aromatic grape shows floral notes of a rose garden and the palate is expressive of white peaches and other stone fruit. While this is a dry white, it is very fruit forward which leaves an impression otherwise. Chilled just right, this light white wine is cool and crisp and the use of neutral oak leaves a round mouthfeel. Yeah, you want this wine for those cool summer evenings ahead of us, but it is also food friendly. Think spicy Thai or light seafood salads.

Dowsett Family Devotion - 2008: Like the back label of the wine bottle says: "Three varieties, one wine." This rich and full 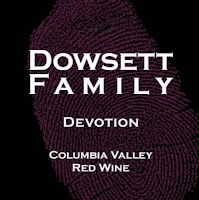 Rhone-style red is a blend of 41% Syrah from Morrison Lane Vineyard at Walla Walla Valley AVA, 30% Mourvedre from Kiona Heart of the Hill at Red Mountain AVA, and 29% Grenache from Destiny Ridge at Horse Heaven Hills AVA. The nose is smoky and smells of black and blue berries. If you could describe what the words, "deep and dark" taste like, then Devotion tastes like these two adjectives. Think a mouth full of dark chocolate covered cherries with a dash of white pepper in the finish. A spicy BBQ and grilled meats and vegetables is on the agenda for this red wine.

If you don't believe that Gewürztraminer isn't a big part of Chris Dowsett's life, ask him about his belt buckle. And the devotion to his wine is shown by his work gloves as they are marked "D E V O" on one hand and "T I O N" on the other.
Posted by wild walla walla wine woman at 8:43 AM