October is one of my favorite months here in the valley and it's also a very eerie month, as well. The weather changes, the evenings are crisp with a light smokiness in the air. It's the end of wheat harvest and the beginning of crush in the vineyards. The days are shorter and the sky is often magical with its full moon. The light from the bluish orb often creates shadows amongst the clouds in the dark blue-gray sky. Even the sunsets are magical, especially here in the Walla Walla 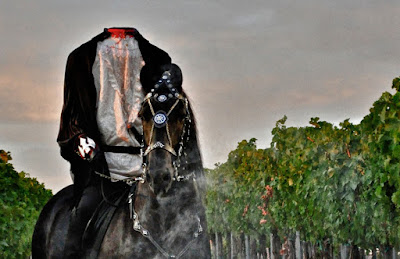 So, Hollywood may have its cult spooky film classics like Sleepy Hollow, but Walla Walla has its cult "spooky" wine classic.

Ash Hollow Winery announced its third vintage release of its rather new and soon-to-be iconic wine label, “Headless Red.” I cannot think of a more appropriate wine to celebrate the summer's end and the arrival of fall.
Ash Hollow Winery started in 1998 when a small group of family and friends purchased a 287-acre farm to start a vineyard. Researching maps from one hundred years ago, they learned that the grounds at one time had a homestead with a large hollow of ash trees and appropriately named ‘Ash Hollow.’ In the mean time, there has been some changes at the winery, but mostly new and exciting growth. "Headless Red" is part of the Ash Hollow's "Legends" brand which was first introduced in 2009. The first release was 450 cases and sold out in three weeks. This new and third release will consist of 1,000 cases.

“More than a label, Headless Red epitomizes everything we believe in about making great wine,” said Jennifer Gregory, general manager of Ash Hollow. “We may be just a dot on the map in the remote tiny town of Walla Walla, but we have big ambitions. We know wine and we want the world to know us. After all, life is too short to drink bad wine.”

And with that said, "Headless Red" is not a bad wine, but it is "bad" as it's sinfully delicious! It's a unique blend of 58% Merlot, 26% Cabernet Sauvignon, 13% Syrah, and 3% Malbec grapes — all hand-harvested before the beautiful Walla Walla dusk from Ash Hollow’s Estate Vineyard. The wine floats aromatics of dark raspberry and bloody crimson cherries with whispering and haunting hints of dark black earth, heady (or is that headless?) spices, and with a subtle oak finish. Headless Red has a mid-palate that is as luxurious as it is accessible.

I attended the Headless Red VIP Release Party on Saturday, which was held outdoors complete with a view of the eastern Blue Mountain foothills. It was a wonderful way to kick-off a fall event complete with hay bales, a bonfire - - and yes, they even queued in the fog machine. Not only was there symphonic, yet eerie background music to get us in the mood, but we were also wined and dined. We sipped on Headless Red and dined on a feast of "small bites" including: mice, worms, bloody fingers, eyeballs, and brains (use your imagination here, folks). And the party got even better ...

The Headless Horseman and his trusty steed appeared out of the darkness and was the guest of honor.

The black horse rearing on the Headless Red label was imported in 2007 from Holland by Jennifer Gregory, Ash Hollow's general manager. The beautiful dark Grimm is a 10-year old trick-trained Friesian gelding. Grimm stands 16 ½ hands high and weighs about 1500 lbs. The gelding was taught to rear on command as shown on the label of Headless Red. Jennifer and Grimm are recognized figures as they frequently ride in local parades and exhibitions in the Walla Walla valley.

Ash Hollow’s new release kicks off with a haunting video depicting the Headless Horseman catching a thief in the act of stealing grapes. Beyond wine aficionados, entertainment junkies and filmmakers alike will appreciate the quality of the story-telling, the beautiful and haunting original score by Terrance May, and the hi-def production and sound effects all shot on location in Walla Walla without the advantage of Hollywood special effects.

Local photographers Don Fleming and Travis Wilton captured the astonishing photo for the label, but also produced and directed the new video. On Saturday evening, not only did the guests view the new goose-bumping video announcing the new release, but we were also privileged to view a slide show of the making of the video. It took Don and his team almost three months from start to finish.

“Its great to see a customer’s reaction when they find out the 'Headless Horseman' is real, and not created in Photoshop,” said Jennifer Gregory.

Ash Hollow is encouraging viewers to log in to YouTube (or see below) and watch the video carefully where a secret code will be revealed offering 1-cent shipping on orders of twelve bottles or more for the month of October. Additionally, people who join Ash Hollow’s Wine Club with the secret code will save 10-25% off the case. With Halloween around the corner, the timing is perfect for the video's tagline - -
"Don't lose your head. Buy estate grown Headless Red."

Posted by wild walla walla wine woman at 8:10 AM