"Some people come into our lives and quickly go. Some people move our souls to dance…” - Flavia Weedn

If you ever read my article in the 2009 November issue of Walla Walla Lifestyles, and also here, then you might remember The Stan Story.

The Stan Story was a short collection of people sharing their own stories about our Founding Associate Director of the Enology and Viticulture Program at Walla Walla Community College. This week the college just announced the new marker for the Stan Clarke Vineyard that was donated by College Cellars at Walla Walla Community College and The United States Air Force Academy - Class of 1972.

Looking at the photo of the new engraved stone marker, once again I was reminded of another 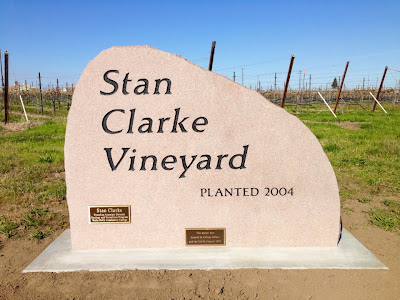 
I was one of the first classes that Stan taught when he first came to the program at the Eno/Vit Center at WWCC.  It was a busy time for me, as not only was I a full-time student, but I was also working a full-time office job, and a weekend job at a local winery. After work, I would hurry and close the office, change from my office shoes to "gardening" shoes and hurry onto my evening viticulture class, still in my professional office attire.

This one particular day was no different as we were told to meet on an empty lot at the airport. Stan announced to our class that we were going to plant a vineyard, as he often did such surprise announcements, and often last minute. It was the beginning of March, almost at dusk, windy, and storm clouds ahead.  This early evening's goal was to measure out the rows, run posts at each end, and then each student was given a row to plant before next week - - Spring Break.

Now, how in the hell was I suppose to get this done in a short amount of time? Before I went to work and by the time I got out of work, it was often dark.  I had one free morning in that week, but not enough time to dig holes and plant the vines. However, it was important to me to personally plant those vines and be a part of their early start. I started thinking about the lean time frame and asked Stan,

"So wonder if I have a limited amount of time to plant the vines, but have zero time to dig the holes? Any chance I could bribe a classmate to dig the holes for me while they are digging their own? I would pay well with bottles of wine."

Stan answered, "Well, any smart business woman, especially one that owns a vineyard, knows that she needs to manage her time well, therefore a smart business woman could definitely hire someone, for less money than what her time is worth, leaving her with time to do what is a priority for her."

That's all I needed to hear. I made two classmates very happy with a few bottles of wine, and I found the time one glorious sunny morning to lovingly plant each of the twenty-some Merlot vines in the burrowed row and placing the soft cool dirt around the vines to keep them steady.

I would later take very patient family members and friends to that vineyard so I could show them the vines and with pride tell them, "I helped plant that vineyard."

Today, looking at that monument, I take even more pride and with much gratitude.

Posted by wild walla walla wine woman at 8:30 AM