Dog Days of Summer and Wine

The "Dog Days of Summer" are usually the hottest days of the year - the period between July 3 and August 11 when the hot sultry weather of summer usually occurs in the northern hemisphere.

That explains the summer, but what about the dog?

In ancient times, when the night sky was unobstructed by artificial lights and smog, people throughout the world drew images in the sky by “connecting the dots” of stars. The images drawn were dependent upon the culture: The Chinese, Native Americans and Europeans all saw different star pictures - now called constellations. The constellations that we are most familiar with are from our European ancestors.

They saw images of various animals, including dogs, Canis Major and Canis Minor. The brightest of the stars in Canis Major (the big dog) is Sirius, which also happens to be the brightest star in the night sky. Look for it in the southern sky (viewed from northern latitudes) during January.

In the summer, however, Sirius, the “dog star,” rises and sets with the sun. During late July Sirius is in conjunction with the sun, and the ancients believed that the heat from Sirius added to the heat of the sun, creating a stretch of hot and sultry weather. They named this period of time, from 20 days before the conjunction to 20 days after, “dog days” after the dog star.

Although it is certainly the warmest period of the summer, the heat is not due to the brightness of Sirius, but is a direct result of the earth's tilt. 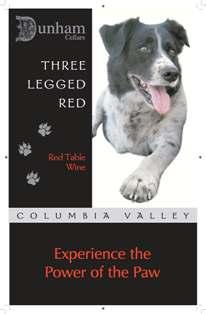 I couldn't help thinking about Sirius, the Walla Walla summer heat and Walla Walla dogs the other day when I was in the supermarket. In the deli section, the meat section and in the wine section were bottles of "Three Legged Dog" table red wine by Dunham Cellars. The wine really caught my eye when a man behind me in check-out put six bottles of "Three Legged Dog" on the rotating counter. I commented, "Great wine, huh?" He said it was a favorite besides liking the story behind the label. He asked me if I was familar with the wine. Of course! I was very familar with the legendary dog named "Port" that winemaker Eric Dunham saved as a pup from the wrath of an angry pitbull. I had experienced the "power of the paw" at a friend's house during a wine tasting. Dunham's "Three Legged Red" is a fine example of one of the great affordable table reds that the Walla Walla Valley has to offer.
During the Memorial Day weekend we paid a visit to Isenhower Cellars". We were greeted by the Isenhower winery dogs, "Molly and Lucy." I was a little partial to Lucy Isenhower, as I have my own Lucy (aka "Lucy Baines Johnson Walker") at home. My "LBJW" is a collie X shepherd = mutt.

Our visit to Isenhower was very enjoyable. We met with Brett the owner and enjoyed visiting with Bob while he poured us generous samples of their uniquely labeled and very aromatic wines. It just so happens Isenhower has their own tribute to man's best friend - "Three Dog Syrah." Wasn't there a band named... never mind. Besides having a beautiful label of three dogs, this Rhone blend is earthy and very fruity with soft tannins. The Isenhower wines I would recommend for their uniqueness, quality and price.

One of the reasons why my thoughts have been with dogs and the summer's heat is that I have a canine wine celebrity staying at my house for a few weeks while her owners are away. "Salsa" is the black lab-mix that hangs out at Forgeron Cellars. She belongs to winemakers Marie-Eve Gilla and Gilles Nicault. Marie-Eve and Gilles are currently in France hosting a wine tour through Burgundy and Provence. "Salsa" and my "Lucy" are getting along quite well for two indulged dog divas.

"Salsa" has her own history with wine. She was found in a vineyard. Thanks to the vineyard crew who was keeping her fed with chips and salsa, which of course explains her name. Marie-Eve, winemaker at Forgeron Cellars, gave her a home. Although "Salsa" does not have her own label, she can be found at Forgeron Cellars greeting customers.
Here is my dog, "Lucy Baines Johnson Walker." In the summer she likes to lay by my wine rack, where it is cool. I suppose I could consider her my own Walla Walla wine dog. 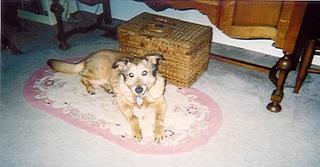 Wonderful! Lucy looks like a lovely girl. Hope to try these wines soon.

That's one beautiful woofer she reminds me alot of my sisters dog!