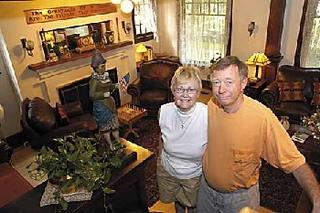 I never thought I would see the day that Margaret and Jim would sell their beautiful bed and breakfast, but the day is here.
Margaret and Jim Buchan, owners of Green Gables Inn, are selling the B&B business and the three gabled, craftsman mansion that was built in 1909 by Roland and Clarinda Green Smith. At one time the mansion served as a home for young women who were studying nursing at Walla Walla General Hospital. The Buchans purchased the house in 1990 and immediately began restoration work. They opened Green Gables Inn for business in January 1991. Not only did I stay at Green Gables Inn, but would later assist Margaret for several years. I even played the role of innkeeper when the Buchans would leave town to take their much needed vacation. It was a lesson learned that there is no rest for the innkeeper who believes in excellence.
Early in the business it was mostly weekenders, Whitman College parents and a few traveling business people. Besides word of mouth and returning visitors, the boom in the local wine industry has assisted in the busy growth of the business.
There is a quote from Ralph Waldo Emerson that is carved in wood above one of the two fireplaces in the large sitting room (see picture). It was there before the Buchans purchased the home:
"The ornaments of a house are the friends that frequent it."
Those words were to become the house's destiny and truly a tribute to the hospitality and detail that the Buchans put into their B&B. It is my opinion that it is going to be hard to fill the inkeeper shoes that Margaret and Jim wear.
Posted by wild walla walla wine woman at 6:41 AM

I agree. The Green Gables would not be what it is without Jim and Margaret.