Sideway Miles Should Spend the Day with Stan Clarke 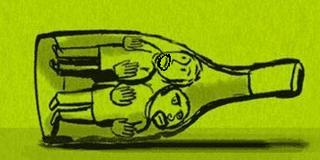 The first time I met Stan Clarke was in January of 2002 at the Institute of Enology and Viticulture in Walla Walla. We were the first group of students for the Institute and Stan was our new instructor. I suppose we were pioneers, really. We were using various empty classrooms at the Ag building, but there were hopes and dreams that we would soon have a beautiful new structure to hold our viticulture and enology classes, along with a working winery. Stan was driving a commute of about 90 minutes to make it to his new job and sometimes in the winter would stay over in a camper before he moved to Walla Walla county. Stan left a teaching job of pre-teen boys with behavior problems and learning disabilities to come to Walla Walla. I bet Stan thought it was a relief to leave behind that for a group of adults. Heh. I often wondered if there were days Stan thought some of us weren't too far behind the pre-teen boys.
Before we knew it, Stan had us grafting rootstock, we were learning to root from cuttings, pruning vines and planting our own vineyard of Merlot. Who was this man that was full of enthusiasm and eager to share everything he knew about the wine business?

A graduate of University of California-Davis and Bachelor of Science degree in viticulture and a Master’s degree in teaching from Washington State University. Stan is a highly respected viticulturist and served as a grower relation’s manager for Chateau Ste. Michelle, general manager of Covey Run Vintners, and a winemaker and general manager of Hyatt Vineyards. Stan has also authored weekly articles on grapes and wines, judged various wine competitions, and served in 1987 as the president of the Washington Wine Institute (the precursor to the Washington Wine Commission). Just about everybody in the State of Washington who is involved in grapes and wine knows Stan Clarke. I discovered that while attending the Washington Association of Wine Grape Growers (WAWGG) with Stan and other students in the Viticulture Student Leadership class. Everybody was talking to Stan or calling out to him and greeting him like he was a celebrity. Perhaps he is a celebrity. I am convinced that Stan knows everything in the industry and I have often referred to him as my "Wine Guru." On the small chance he can't answer a question, he knows who can. Stan is a patient man, enthusiastic about the wine industry and enthusiastic about his students.
As an example the encouragement that Stan Clarke shows his students is the recent story written by Timothy Egan*, for the New York Times, about Victor Palencia. A former student of Stan's and now a 20 year old winemaker for Willow Crest Winery in Prosser, WA.
http://www.nytimes.com/2005/10/19/dining/19kid.html
I think Jack would have had a lot more fun traveling Napa Valley with Stan Clarke than Miles Raymond.
**The NY Times article is written by Timothy Egan. Egan is a third-generation westerner who was inspired to write "The Winemaker's Daughter", after living in Italy for a year. The novel is about the harsh realities and ecological challenges of turning water into wine. Egan also a recipient of a Pulitzer Prize in 2001 for his part in a series on Race in America and he has worked for the last fifteen years as a national reporter for the New York Times. He grew up in Spokane and now resides in Seattle.
Posted by wild walla walla wine woman at 7:33 AM

I just reread this blog after hearing the news about Stan. So sad, I just saw him yesterday at the College.

Michele, thanks for writing. For once in my life I am at a loss for words. I referred to Stan as "My Wine Guru."

As a first year student in the program, I am deeply saddened by the news. Stan opened his home to my wife and I before we moved here and was a gracious host. This program and community owe a lot to his hard work and dedication. Thank you for this blog. Thoughts and prayers to the family.

Please see the tribute for Stan There's a wonderful photo of him and notice the logo on his shirt. It's one of his other passions besides wine - The Grateful Dead.

A glass of Lemberger in toast for the man who is the reason most of us are here. He had a passion and energy that the rest of us could only hope to keep up with. Never have I grown so close to someone who I hardly knew, but with Stan Clarke, one need not know him to love him, only experienced him...