Girl Power and the Muleskinner!

Don’t ask why, but for some reason as soon as Autumn begins to tease with a bit of chill in the Walla Walla air, I often think of the Merlot produced in the Walla Walla Valley. It’s like I’m not quite ready to hunker down for the winter and be committed to a stout rich wine, like Cabernet Sauvignon. Instead I am looking for red wine that’s a bit softer, but with just as much flavor.

Last Friday evening was all about "Girl Power!" The 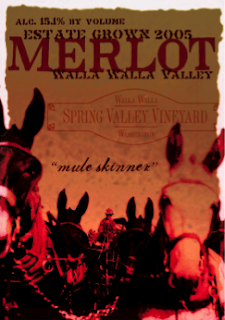 Autumn wind and rain moved a few leaves from the trees outside, while inside we moved a few cases of wine around and a few pieces of furniture. Actually, my generous helpers did the bulk of the moving while I kicked a few empty case boxes around and pointed where I wanted pictures hung. But, it was me who ultimately opened a bottle of wine – so that counts for something, right? The wine of choice was a Spring Valley Vineyard Muleskinner 2004 - - a 100% Merlot! Perhaps, this was an appropriate wine for the working evening as after all, the term “muleskinner” is: one who drives mules. No doubt by the end of the evening the team of “Girl Power" movers were feeling as if they were driving one lame mule (moi) - - and a stubborn one at that.

There’s a reason why the winemaker’s of Walla Walla haven't traditionally used Merlot strictly as a blending grape. Merlot, a grape which often takes a back seat to Cabernet Sauvignon, has become one of the popular single red varieties in the valley and one of the reasons is the fruit from the Walla Walla Valley is like no other – complex and rich, with mineral and earth tones visible in the flavors and the nose. Spring Valley Vineyard in Walla Walla County is an excellent example of rich and complex wines from their farm land which dates back to the mid 1800’s. This particular vintage of Spring Valley Muleskinner - 2004, has a few years on it and since that release, Spring Valley has released their 2005 (the winery is sold out of the '04, but email me if you are interested in a bottle or two).

The extra time in the bottle made the tannins slightly visible, while still keeping structure to the wine. The dark plum color and the rich mouth feel had an elegance about it like sipping a black currant cassis aperitif, yet a familiarity as inviting as Grandma’s blackberry pie - from the filling of the dark fruit to the crust reminiscent of the grains of wheat from the past. The sweet finish continued long after our glasses were set down, while we remarked about the complexity of this fine Merlot and smacking our lips. Cheers to Girl Power and the Muleskinner!
Posted by wild walla walla wine woman at 7:28 AM