Opening a bottle of wine is like opening a scrapbook. Wine can tell a story: from the label on the bottle to the nose and palate of the splendid nectar. I think there is no other intoxicating liquid quite like 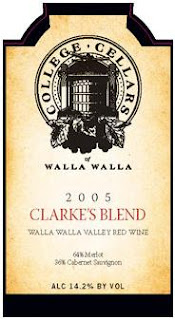 wine that has the power to wrap us in remembrances and recollections.

Wine is meant to share with others and I wanted just the right moment to share the new bottle of Clarke’s Blend – 2005. You see, it was a limited bottling by the students of College Cellars. Only 70 cases were made of this one-time release and it was offered by invitation only. This special blend was dedicated to Stan Clarke, former Associate Director at the Center for Enology and Viticulture at WWCC.
It was a year ago at Stan Clarke’s memorial service that I remember Stan’s wife, Dr. Carol Clarke, shared with us their last Thanksgiving together. Dr. Clarke told the crowd how on Thanksgiving Stan had commented that the upcoming Christmas was going to be the best one ever. However, Stan died a week after that Thanksgiving on November 29, 2007. I thought this year’s Christmas, with a house full of family and friends, would be the perfect time to share a bottle of Clarke’s Blend – 2005 (Bottle No. 0398).

The blend of 64% Merlot and 36% Cabernet Sauvignon truly stood out amongst the many exceptional wines we shared throughout the evening. The nose reminded me of Christmas candy, of jellied orange slices, chocolate covered cherries and creamy vanilla centered chocolate bon-bons that I often found in my Christmas stocking. More chocolate, cherries and vanilla came through on the palate and rested on the tongue like silky milk chocolate. The tannins were firm, but not overwhelming. Everyone commented it was their favorite wine of the evening.

Clarke’s Blend - 2005 was produced from the first crop of Merlot and Cabernet Sauvignon planted under the direction of our late mentor and friend. As we sipped the red blend from the Walla Walla Valley, I recalled to my guests my personal memory of planting the first crop of Merlot
It was the first winter of the program and Stan Clarke was our new instructor. The ground had just barely thawed and Stan had us out in the late afternoon until early dark measuring and staking out what would be the first vineyard for the Center for Enology & Viticulture. Besides being a full-time student, I was working two jobs: my Mon-Fri office job and my weekend job at a winery. I shared with Stan that I had almost zero time to plant my portion of the vineyard that was to be completed on our own time during our week of finals. He asked me what a smart business woman and vineyard owner would do, faced with a deadline, to get her vineyard planted? I told him “she” would hire out. Stan said it sounded like a wise solution to him. 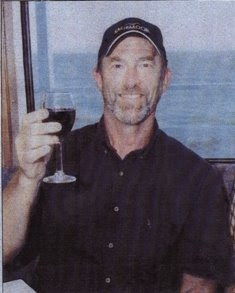 So, I “hired” a couple of fellow students to dig the holes where my assigned portion of the new vineyard was. The pay-off for them was a sweet deal as they were paid with bottles of wine and I was able to squeeze in some early morning time to plant my vines instead of digging holes. I knew how to dig holes, but I wanted the opportunity to plant the young Merlot rootstocks. It was important for me to tuck in those young vines and cover them with the blanket of soil.

This Christmas Eve I felt a huge connection with the first crop of Merlot that went into this bottle of Clarke’s Blend. But most of all, that evening I felt a connection to a friend - - my “wine guru.”
To you, Stan.
Posted by wild walla walla wine woman at 9:38 PM

Oh my are your ever right about Clarke's Blend - 2005. We were lucky to get 4 bottles of this special wine. We took a bottle in our suitcase to Phoenix over the holidays and my oh my was it ever good. I know right before Christmas they still had some bottles and I am hoping to get my hands on a few more. Great wine and great person. Thanks for sharing this Catie.