Winding Down the Walla Walla Vine - 2008

As always, I was blessed with the opportunity to share with friends and family good food and especially good wines from the Walla Walla Valley during this holiday season. And along with a beautiful and extensive selection of wines, "Raclette" has become a standing Christmas Eve tradition for us.

What is Raclette? Of course, raclette is a semi-firm cow's cheese originating from Switzerland and also produced in certain regions of France. Typically the round of cheese is heated in front of a fire and then scraped onto diners' plates. The term, raclette derives from the French racler, meaning "to scrape." Traditionally, raclette is accompanied by small potatoes, smoked meats and sausages, mushrooms, peppers, onions and we also enjoy zucchini.
Now - - I don't place the cheese in front of a fire nor do I build a camp fire outside like the Swiss cow herders use to do. Thank goodness there is a modern way of serving raclette that involves an specially-made electric table-top grill with small pans, known as "coupelles," to heat slices of raclette cheese in. I have a large island in my kitchen and it is a perfect set-up for the raclette grill. To the island I bring a platter of sliced cheeses, such as raclette and other semi-firm Swiss and French cheeses. Other platters of food such as a platter of smoked meats and sausages and a platter of raw vegetables to be grilled. Accompanied is a bowl of steamed baby red potatoes. Also, cornichons (gherkins) and other pickled vegetables make a nice accent.

My guests create their own plates by cooking small amounts of meat and vegetables on the grill, while coupelles filled with cheese are placed under the grill to melt and get all toasty and bubbly. The melted cheese may be poured over the potatoes or over all of the food on the plate. This is one of the things I love - everyone gets to create their own!

No matter how fancy of a table I set in the dining room, it seems like eventually everyone is drawn to the kitchen. It's the kitchen that becomes the social spot. So, the art of raclette at one end of the kitchen island and a large assortment of wine at the other end makes this style of dining relaxed and sociable and often running into several hours.

There are many new and wonderful Walla Walla wines that I was able to imbide in during this holiday season and one of them was Saviah Cellars Malbec - 2006 (and in the days ahead I will continue to write about more wines). 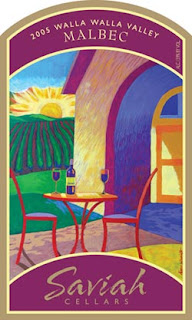 soil. The Saviah Cellars Malbec started in silt-loam soil from the McClellan Estate Vineyard located in the Walla Walla Valley appellation. The nose was sweet and reminded me of blackberry jelly spread on a graham cracker. However, the palate graduated for me from the days of being a kid eating the treat of jelly and crackers to an elegant blackberry cobbler. The Malbec was rich and concentrated like the filling of a oven-baked cobbler with a spicy, but not overwhelming, finish of cinnamon and nutmeg. This bottle of Saviah Cellars didn't disappoint me, as it had everything that I look for in a Malbec.

If you're not quite captured and mesmerized to a cluster of Walla Walla "berries in a bottle" like I am, then the beautifully colored and artistic label from Saviah Cellars will surely draw you to this wine.

Here's to a year of peace and may you prosper - Peace, Paix, Paz, Shalom!
C~