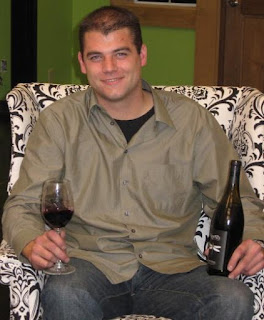 Brothers, Chris and Cameron Kontos are no strangers to the wine industry. Their father, Cliff Kontos is co-owner of Fort Walla Walla Cellars and Cameron (photo) is the winemaker's assistant at Forgeron Cellars. With these deep vines already planted, this team of brothers are off to a great start as Chris will be manage the business and of course, Cameron will produce the wines.

A few weeks ago, Cameron invited me to their new winery for a tour and just as important, to taste their wines. Their winery is located in one of the brand new buildings located at the Port of Walla Walla winery incubators on Piper Avenue at the airport. The yellow butter-cream exterior is welcoming and the interior is lively and bright, yet presents touches of elegance from their black and white labels. 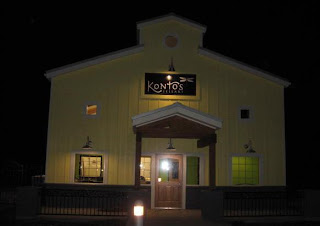 At this time, the wines are bottled under two different labels - Kontos Cellars and LeeVeLooLee. Single varieties, such as their Merlot and Syrah are labeled with the Kontos family name and blends will be bottled with the LeeVeLooLee label. Okay - - so, how do the wines taste?

To sum it up - smooth, silky, well-defined, keeping with varietal character and just like their labels - - elegant. I know - I seem to be using that word a lot, but when you see the labels and taste the wine - - you’ll understand.

"Gossamer" - 2007 is a white blend of 67% Chardonnay and 33% Viognier. However, when you place your nose to the bowl, you would think the blends are opposite. The Viognier immediately unleases notes of floral and stone fruit. Trust me, this blend is going to sell fast and so fast that you will only be able to buy it directly from the winery. 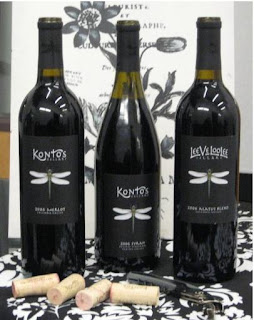 Valley. Dick Boushey is known for being one of the finest growers of Syrah in Washington State and Kontos Cellars knows how to show off this fruit. It screams food! While tasting it, I told Cameron that the glass of inky purple liquid made me hungry for a piece of bloody prime rib - - and I usually don't order my prime rib rare, but I was craving it with every sip of Syrah. Cameron knew exactly what I was referring to as he commented the Kontos Cellars Syrah was "meaty." Tones of ripe blueberries were also very visible.

Ahhh - - Alatus. The LeeVeLooLee Alatus (species name: means “with wings") 2006 is a 1/3 blend of each: Cabernet Franc, Cabernet Sauvignon, and Merlot. I could have sipped this blend all night! Ummm...and I did... for a few hours, anyway. Notes of chocolate covered cherries, dark cocoa and licorice were dancing in my glass. It was luscious and rich. I also tasted their Merlot - 2006, but Cam tells me the Merlot will not be released until Spring of '09. So, we'll save those notes for later.

All the best to the Kontos boys and their families in this venture!

Very nice identity, site, copy and labeling. I work for a design firm looking for business — nothing doing at Kontos!