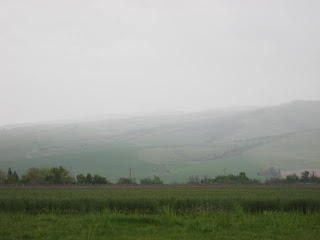 My first winery visit for Saturday morning was a 9:00 am appointment at Garrison Creek Cellars. I looked forward to seeing the final completion of the winery, as I had seen it in several stages while it was being built. The weather, on my drive out on Cottonwood Road, reminded me of the Oregon Coast. There was a bit of fog rolling from the multi-colored foothills of the Blue Mountains. The sky was gray, but clear and calm. The drive through the Les Collines Vineyards to the winery reminded me back to the days when it use to be pea fields and now there were beautiful buds of soft green and pink hued grape leaves breaking on pefect trellised rows.

From the distance, Garrison Creek Cellars seems to blend in with the rest of the rural setting. A 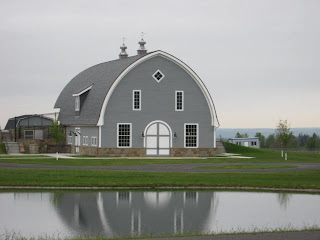 lone barn sitting in the middle of a "field" until you get up close and realize this isn't just any old barn and those fields are yes - - "grape" fields! The new pond in front of the winery had been filled and the setting was peaceful. David March, winemaker and manager, not only gave me the tour, poured their current releases, but we went down to the caves and did some barrel sampling of some of the 2008 from Les Collines Vineyard's 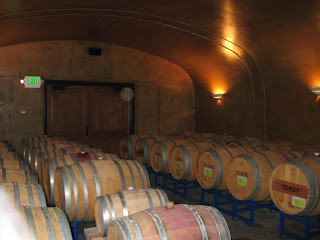 fruit. These are rich and intense reds and as David explained, the winery is at the advantage as they can give the fruit some extra hang time as once it is picked it can be pressed within almost eight minutes from the vineyard. From the barrel, the Zinfandel was very distinct with loads of raspberries and dark cherries and an ongoing spicy finish. The ultimate was their Malbec. Putting my nose deep into the bowl of my glass, I would have sworn I was smelling a 'Bux extra bold sumatra coffee. It was intense and the finish kept going. What really blew me away were these wines have just begun to get some barrel age and they were already showing overwhelming and distinct qualities.

I left Garrison Creek and destination was out to the Middle Waitsburg Road to Couvillion Winery. I know - I know, I am always tasting the wines of Couvillion, but Jill is one of my "gurlz" - my "homies." (do the youngsters still use that term?) And besides - I was feeling a bit peckish and I knew she was serving up authentic tacos with spicy shredded chicken prepared with citrus juice and wrapped and cooked in banana leaves. For dessert, spicy chocolate truffles from Petit Noirs chocolatier were paired with Jill's red wines. I also wanted to taste the new 2006 Cabernet and Riesling and visit with the rest of the Couvillion family - Craig, Lisa, Nicole, and Felicia. So there!

Back on the highway with destination: the airport 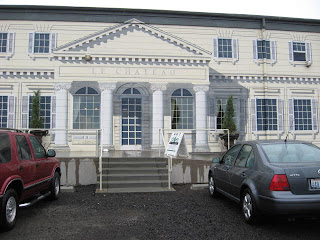 "wine ghetto." My first planned stop would be the new winery, Le Chateau housed in a 10,000-square-foot former Army warehouse. However, with a little paint, a mural on the front of the building designed by using the French technique of trompe-l'œil and - - voila! You have an elegant chateau complete with fifth century Ionic columns! While I visited with tasting room manager Angela Locati (also in the photo with Angela i 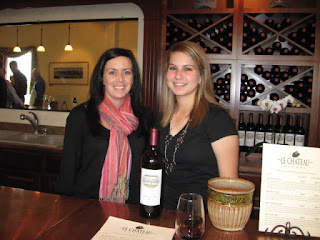 s Marissa) and winemaker, Bruno Corneaux, a French-born winemaker, (also winemaker for Claar Cellars in Pasco, WA) I tasted Castle White, a blend of 80% Sauvignon Blanc and 20% Semillon. It was a full bodied wine and with a big fruit forward taste, yet with less than 1% residual sugar. The fullness of the fruit made the wine almost sweet, yet still showing layers of acidity. Also, an impressive blend was Masterpiece Red, from local vineyards Ash 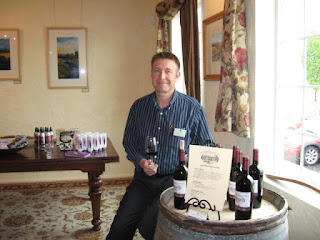 Hollow and Winchester which really showed off the quality of Walla Walla fruit.
I decided my next stop at the airport was - - whatever winery that didn't have tons of cars in front. Mannina Cellars actually had plenty of cars parked around the winery, but all of a sudden there was an empty spot! Perfect, as I wanted to taste Don's new release Maddily Rosè named after Don and Nicole's two young daughters, Madeline (who also designed the label) and Emily. Maddily is a 100% Sangiovese Rosè, 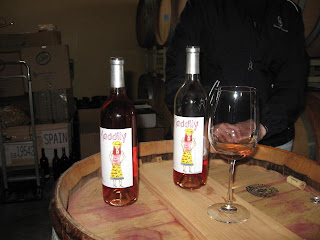 crafted from the free run juice of cold-soaked Walla Walla Sangiovese. It was dry showing notes of strawberries, raspberries and I even picked up a bite of almond in the finish. And it went so well with the assortment of imported cheeses Mannina was offering.
Next stop: The Port of Walla Walla Winery Incubators! Part III
Posted by wild walla walla wine woman at 7:04 AM