Glencorrie is a fitting name for a winery that's tucked away in a small glen. The south facing slope reminds us of the corries that were left behind by the result of the historic Missoula floods which shaped our celebrated area, so many years ago.

The timing of my visit to this new winery could not have been any better, as the liquor board had just left a few hours before and leaving their seal of approval. It was official! On June 5th, Glencorrie Winery was open for business and it was just in time for the Vintage Walla Walla weekend!

It’s quite picturesque – the winery grounds has yards of blue sky above, framed with a view of 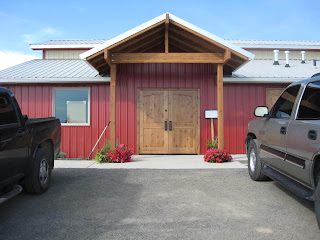 the Blue Mountains from the south and in a lush countryside surrounding. At the end of the long drive-way you are met with a custom designed 3,000 sq. foot horse barn positioned in the middle of a 13-acre parcel along Highway 12, west of Walla Walla.

Ronn Coldiron, co-owner of Glencorrie greeted my guest, Sue Tarver and me, as we arrived from the drive. However, Sue wasn't really a "guest," as she was coming back to a place she use to refer to as "home." Sue was the former owner who established the barn and would eventually sell it and the parcel to Ronn and his brother, Dean. At this point, I was the observer, who not only learned about the exciting future for the winery and vineyards, but also learned about the wonderful history and the thoughtful craftsmanship that went into the structure and the land.

In 2002, brothers, Ronn and Dean Coldiron planted a small 150-vine experimental vineyard in California and started their search of the perfect location for an estate vineyard and winery setting in the Walla Walla Valley. They will tell you that they could not believe their good fortune when they discovered the custom built pole building with the monitor-style roof. The traditional barn red colored building holds six stalls with a center aisle. Pine tongue-and-groove paneling is lined on the stall fronts and the interior. The center aisle holds a unique part of Walla Walla history as it is paved from used brick that was salvaged from the demolition of the old St. Patricks Catholic School dated back to the 1860's. Sue told us how she painstakingly cleaned each brick by hand.

The land, which features a good, but slight elevation with a south facing slope, also has its share of Walla Walla history. It was owned by an early French Canadian resident of the valley who was married to a local Native American woman. The land had been awarded to them in the mid-1800's under the Donation Land Claim Act, which preceeded the Homestead Act. 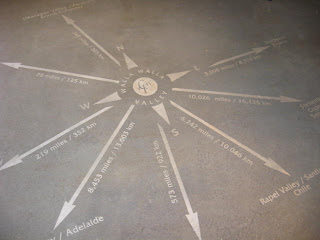 environment. The former open hay storage is now the enclosed tasting room. The new tasting room features a compass-like map on the floor showing that all good wines from all around the world, lead to and from the Walla Walla Valley. Some of the stall area is currently holding barrels and eventually some of the actual stalls will be part of a barrel room. 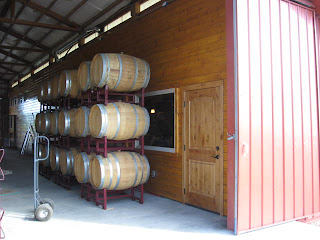 Once the Coldirons had the land and the building, they also needed the wine. Again, with their good fortune, they were able to commission Charlie Hoppes, owner and winemaker of Fidelitas Wines at Red Mountain to make their inaugural releases. Charlie is no stranger to wineries on Walla Walla West Highway 12, as he was the original winemaker at Three Rivers Winery when they also opened their doors on Highway 12. Hoppes's approach to wine is a style the Coldirons want to identify with for their winery - acknowledging that wine is food and meant to compliment a meal. Production will be limited to 500-600 cases of premium Bordeaux-influenced varietals and blends. 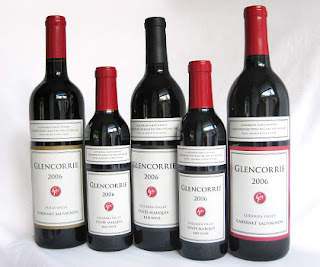 look for in a Walla Walla cab. It was dark and rich as if I had just popped a chocolate covered cherry in my mouth. The nose hinted of those crisp Autumn evenings in the Walla Walla Valley. This Walla Walla wine made my Walla Walla Wine Woman palate swoon!

Glencorrie Columbia Valley Cabernet Sauvignon - 2006 released notes and flavors of juicy blackberries, with just a hint of spice. Even by itself, I could tell this wine was going to compliment a rich dining experience - - say steak au poivre or a steak with a wine redux of the same.

Glencorrie Cuvee Marquis - 2006, a tribute to the Coldiron's mother’s maiden name, Marquis, this is a distinguished blend of 70% Cabernet Sauvignon, 20% Merlot, and 10% Malbec. It was rich, leaving a mouthful of currant jelly, anisette, and juicy brambleberries - - with just a playful touch of graham cracker.

These wines are rich, smooth and very well balanced. The fruits are allowed to shine through showing their true character by being aged in 50% new French and American oak including 50% one year old barrels. And while these wines are made to compliment food, they complimented my palate even without the food. I look forward to Glencorrie making their own history in the Walla Walla Valley. 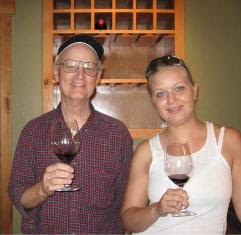 What a terrific post on this new winery in Walla Walla. You've really connected me to the who, what, and where behind this new producer in the valley. I look forward to checking these folks out on my next visit. Thanks Catie!

Wonderful story, thanks! This looks like an excellent place to host an artisan steak/burger and wine tasting event, glad I stumbled upon your post.