As some of you may know, I am such a wimp in this heat.  I will never become one of those little ol' blueheads (Well, wait a minute. I guess I already have blue hair ...) who moves to Arizona to retire.  Being a wimp in hot weather is nothing new as I was a casualty of heat strokes as a kid - - and well, even as an adult.  You tell me how embarassing it was to pass out at the Field House at Washington State University one hot September afternoon while watching homie Drew Bledsoe on the football field  - - oh yeah, and the only liquids in my system was water and diet Coke.  So there! 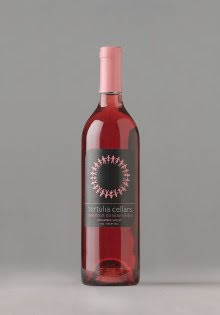 Late Monday afternoon I took a tour of Tertulia Cellars and their vineyards surrounding their estate with winemaker, Quentin Mylet and vineyard manager, Ryan Driver.  It was warm, as usual - - HOT!  We toured through the vines and as I watched the  small green berry clustered vines soak in the water from the drip irrigation, all the time I was thinking to myself, "Like the vines,  I am so happy to also be soaking up some liquid, especially this chilled glass of Tertulia Cellars Art Den Hoed Vineyard Rosé du Mourvèdre - 2009."
I am so loving these crisp and cool rosés that are coming out of the Walla Walla Valley and I just happened to have found another one that is worthy of a good rant. If you are a lover of the red grape and often ignore white wine (you know who you are) then you should really open your mind to rosés. You have all of the taste of a red wine, but presented to you in a much lighter and refreshing style like a white wine - - and even better with a chill.
The 2009 growing season in the Columbia Valley started with one of the coolest springs on record, and wet, therefore a very late bud break. As spring transitioned into summer, the temperatures after July 4th was turned up like a blast from a hot furnace making July and August hot-hot-hot! The grapes ripened earlier than usual.

The Art Den Hoed Vineyard stretches 250 acres over the south slope of the Rattlesnake Mountain in the Yakima AVA at 1,300 feet of elevation. There is something about high elevation that tends to draw the Den Hoed family, as they would later establish the Wallula Vineyard overlooking the Columbia River.

Mourvèdre is a red grape with French roots and is known to produce tannic and high in alcohol wines.  It is most successful in Rhone-style blends. This brilliant-colored red rosé from Tertulia Cellars was barrel-fermented in 100% neutral French oak  giving it just the right amount of roundness and still allowing to show off the fruit's bright acids without a visit from the "oak monster."
During fermentation, temperatures were kept below 60° F to reach dryness and in order to preserve the wine’s aromatics of strawberry-rhubarb pie with a spoonful of vanilla ice cream.  Yes - - that's my visual  - - strawberry-rhubarb pie with vanilla ice cream.  And the flavors of this summer dessert continued on in the palate. So how can you pick up a flavor and/or mouthfeel of vanilla ice cream, you ask?
Lees are often stirred to give wines a creamy mouthfeel in the finish.  Lees (in France known as "sur lie") refers to deposits of dead yeast or residual yeast and other particles (like grape skins) that hang at the bottom of the barrel or tank during fermentation and aging. "Stirring the lees" (also known as "batonnage") provides that creamy mouthfeel that is often described in the finish of red and also white wines.
Okay, now with science of winemaking behind us, let's get back to the Tertulia Cellars Rosé du Mourvèdre:  It is one of those summer wines, that is not only the perfect porch sipper (yes, I could have finished the bottle by myself ...) but a wine to be explored with a summer menu of grilled vegetables, hamburgers, shish kebabs and BBQ pork.  If and only if you can hang onto a bottle  by the time Thanksgiving rolls around, I highly recommend it with the turkey feast.  Cheers!
Posted by wild walla walla wine woman at 11:37 AM