See them tumbling down ...
Drifting along with the tumbling tumbleweeds. - Sons of the Pioneers 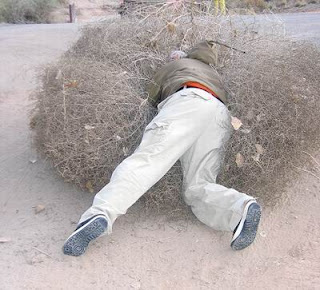 Honestly, as long as I have lived here, I have never seen clusters of tumbleweeds roll down the middle of Main Street Walla Walla. However, I read about these parades of weeds rolling down Main Street in various wine-related articles from writers based in New York, Los Angeles and even western Washington. If I didn't know any better I would think that these old tumbleweeds are being released on cue by Tourism Walla Walla, at least when I am not around, so the visiting journalist can write their usual, "Walla Walla has a "folksy" Western feel to it."  One over-enthusiastic writer even left me with a colorful impression that Main Street Walla Walla was nothing but a dusty dirt trail complete with Lewis, Clark, Sacagawea, Marshall Dillon, Doc, Festus, Chester, and Miss Kitty.
Of course the unwritten rules are this: If a wine blogger wrote about the tumbleweeds constantly rolling down Main Street, we would jump on their heads and dance the "You Are Wrong Again Blobber" dance and the very least would be take these words with a grain of salt. If a "writer" publishes this information in a newspaper or a magazine, it is the gospel even if I have never witnessed these clusters of round thickets rolling along with Main Street traffic.
As wine bloggers are growing by leaps and bounds, criticism follows and grows. Wine bloggers have been lectured to by 25-cents-a-word wine writers who talk down to us like parents to their kids, "Don't do as I do.  Do as I say." Our wine blogging talents are being downplayed as wine-o consumers who are merely posting an equivalent of a teenage online diary. We often get placed in this below subclass of "wannabe wine writers" and we are all just jealous and want to be Robert Parker when we grow up - - so our critics say.
There is one thing I am beginning to agree with the critics on: Everybody wants to be a wine writer.  Something tells me that the majority of newspapers and online magazine articles I read about Washington and especially Walla Walla, the reporter hasn't even visited Walla Walla or they wouldn't write the erroneous things they do. A writer from Los Angeles told her readers that Walla Walla's remoteness was going to really devastate the 2009 Spring Release Weekend.  Remote? We are (she says with sarcasm)? Now you finally tell us o' wise one from Los Angeles. Where was the big city LA writer and expert on Walla Walla when it came time to direct congested traffic on Main Street and the bumper-to-bumper traffic on the highway coming east into Walla Walla that busy event weekend?  Did she follow up on her report to announce that it was one of the biggest Spring Releases, financially, in Walla Walla wine history? Of course not.
Then there is the ever-so popular phrase that many destination writers want to claim as their own cleverly coined phrase, "Walla Walla is the Next Napa."  Come on! That is getting as tiresome as "What goes on in (fill in the blanks), stays in (fill in the blanks)."   If these writers really understood Walla Walla's remoteness like they all seem to be an authority on, they would know that Walla Walla is never going to be another Napa - - nor want to be.
Like our critics said, "Everybody wants to be a wine writer."  Fine.  Let's all be wine writers.  I have no problem with that, especially in today's economy.  Let's all make a contribution and spread the word about wine, wineries and wine destinations, but when you report your findings - - GET YOUR FACTS STRAIGHT!   What are readers going to think when they are sent to restaurants that have been closed for months because you haven't been here for months and/or send readers on a wild goose chase to restaurants and wineries with incorrect and misspelled names?  While peppering articles with recommendations of wine destinations, how about getting the mileage correct? The readers may decide not to travel to our Washington/Oregon Border wineries and vineyards because they read it was a 30-mile drive from downtown Walla Walla to the stateline border instead of an easy less than 10 miles with designated wineries along the way.
This is the kind of sloppy and irresponsible reporting, with zero to little fact checking, that can actually make the tourist's visit less than enjoyable and memorable, besides not helping a business at all when tourists cannot find the location because they were given the wrong name.
In the mean time, would someone like to tell me why we have critics about wine bloggers being "sloppy and irresponsible" and yet they are not policing their own? I think we should take 25-cents a word away for every bit of misinformation that is published in newspapers and magazines and put it in a wine blogger's fund.
Posted by wild walla walla wine woman at 5:10 PM

How does it feel knowing that James Franco stole your picture and put it on his twitter and added the copyright logo with his name? Flattered?