That's right. Put up your wine glasses for Pistolero!

One of the best kept secrets in the Walla Walla Valley is El Corazon - - and don't let the scary dude on the wine label keep you away, either. Winemaker and owner of El Corazon, Spencer Sievers, is much more handsome and swoon-worthy than his pistol packing zombie alter-ego. (Perhaps you might even recognize him from the notorious Ash Hollow Winery Headless Red video? He lost his head over it - - so to speak).

Spencer, along with Raul Morfin (assistant winemaker at Reininger Winery, as well)  conspired to form, not only a friendship, but to open a winery downtown Walla Walla and take advantage of some of the best grapes in the Walla Walla Valley. 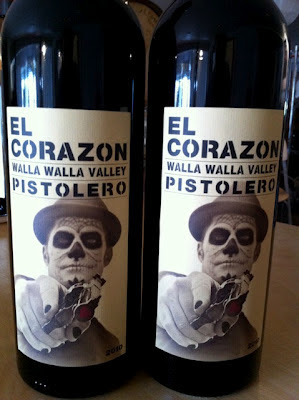 El Corazon's  focus is on Cabernet, Carmenere, Malbec and Syrah terroir-driven and fruit forward single varietals - - with the exception of Pistolero. Pistolero, meaning "gunman" in Spanish, was originally going to be named "Six Shooter" for all of the six original Bordeaux varietals that went into this blend: 27% Cabernet Sauvignon, 27% Malbec, 27% Merlot, 7% Cabernet Franc, 6% Petit Verdot, and 6% Carmenere.

However, with some after thought, the duo thought "pistolero" would roll off the tongue easier and no doubt, it would be unforgettable.

The wine itself is luscious and far from scary! However, like the label the wine is "dark." This Walla Walla blend of fruit is deep, dark and rich. On the palate it is smooth, chocolately, a mouth full of cherries and graham crackers, yet finishes with a hint of spice.

Spencer says when El Corazon produces blends, not only is each blend unique, but he views their labels as art projects. He says last year they used "black duct tape" for the two blends, "Fenix" and "Junior Varsity."  The story behind the Pistolero label was Spencer's idea to design the wine label to resemble a "wanted" poster. He says that many people have expressed the label as a little "creepy" but often it is the appeal to grab a bottle.

Take notice of  the gun barrel. It isn't your regular barrel as the bullets that leave this barrel are heart shaped. Awww - a wanted zombie spreading the love ... and we love Pistolero!
Posted by wild walla walla wine woman at 8:00 AM