It's true, other than a great Merlot from Washington State, a Cabernet Sauvignon from Washington is the wine I typically reach for.  And recently, I have sipped a few that I feel the necessity to being to everyone's attention and shout out some favorable rants.

Seven Hills Winery, Seven Hills Vineyard - Walla Walla Valley Cabernet Sauvignon - 2009: These are some old vines. One the nose are the aromas of the kitchen harvest - bright fruit of raspberry jam, cherries and plum pies - - with just a hint of almonds. The palate brings more ripe red fruit of berries and plums and finishing up with hints of cigar box, espresso and pepper. Very "Walla Walla."

Tero Estate Cabernet Sauvignon, Windrow Vineyard Old Block - 2008: From the heart of more old vines of Windrow, in the same area as Seven Hills Vineyards. I could just sit around all day and smell this nose - violets and dark stone fruit. Earth. Big, yet smooth on the palate. Just the right mixture of tannins and acids. Round on the palate with hints of dark cherries and a dusting of cocoa. Lush. Stunning. 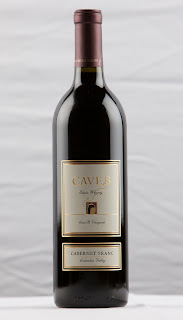 Cave B Estate Winery Cabernet Franc 2009: I decided to throw in a ringer.  Cave B Estate is a boutique winery located in the Columbia Valley wine region in the center of Washington State Wine Country, within 900 feet above the Columbia River.

Putting the nose deep in the wine glass bowl, this wine shows off aromas of licorice - red and black. There are hints of cranberries and spice. Dark cherries tickle the palate at first and later the tartness of the cranberries shine through to the finish, leaving just a hint of green in the background. Smooth. Exceptional.


Posted by wild walla walla wine woman at 8:00 AM