At the stroke of midnight on November 15, all wine lovers waited with bated breath on the arrival of the first wines from the 2012 harvest from Beaujolais, France, Le Beaujolais Nouveau est Arrivé!  The cynical side of me wondered about it all - - and especially wondered if the villages of Lyon and Beaujeu really celebrated as enthusiastic as what we envision? And how much of it is a shrewd and very clever marketing scheme by the pape du Beaujolais, Georges Duboeuf?

And what a coincidence that it happens the Thursday before one of our biggest American feasts - - Thanksgiving. Okay, so this celebration of the newly fermented gamay grape has been going on since the late 1930's, how convenient to get this wine into the American market just before the third Thursday of November so it can be paired with America's symbol of the day - the turkey. 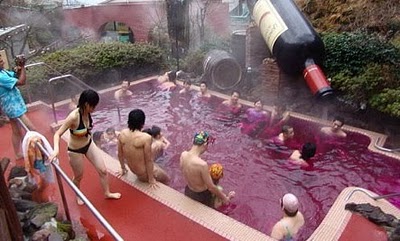 No, I don't think American wine lovers eagerly await at the docks for this young fresh wine and revel and dance in the streets once they open the bottle. But while the American consumers have a tendency to get caught up in grand marketing schemes, like pitching tents in front of department stores after their Thanksgiving dinner to be the first for the so-called "best deals"  - -  we aren't as crazy as the wine enthusiasts in Japan who celebrate the arrival of the newly plucked Beaujolais Nouveau by taking communal baths in the strawberry Kool-Aid colored stuff. 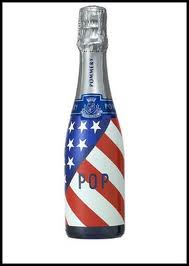 This got me to ponder American wine marketing even further. Pommery Champagne, one of the region's largest Champagne brands has brought to the American wine market, Pommery Pops, adorable mini bottles (187ml)  bottle of Champagne. They come in a blue bottle with a silver label or gold packaging and even with the American flag plastered on them. Me thinks that the Widow Pommery would be rolling in her grave if she even thought her country were drinking these cutesy little bottles of "Pop."

The Champagne house of Nicolas Feuillatte has followed this trend with "1/4" bottles decorated with attached lanyards to attach to your belt loop or key chain,  in brut and also rosé.  While visiting France is in my future, something tells me that I won't be seeing the French strolling the streets with these little bottles, let alone even be caught purchasing one. 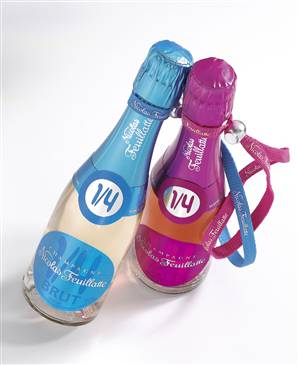 Okay-okay, so I have to admit, they are pretty cute and yes - - I have purchased them! Only due to the fact that Nicolas Feuillatte bubbly rosé is my favorite and makes my knees weak - - but at the time I didn't want my knees to get too weak from drinking a whole 750 ml by myself.

Germany is finally getting even with us after World War II.  Zeller Schwarze Katz Riesling - - aka Black Cat from Zell. According to legend, three wine merchants came to the town of Zell, Germany to buy wine. In one of the cellars, they tasted several wines out of different barrels.

They had narrowed the choice to three barrels but they couldn’t agree on which one was the best. They were about to take another sample, when suddenly a black cat jumped on one of the barrels, arched its back and swiped its paw at anyone who tried to get closer. The wine merchants quickly came to an agreement and chose the barrel which was so obstinately defended by the cat, thinking that it probably contained the best wine.

Merchants marketed the wine under the name "Zeller Schwarze Katz" (black cat from Zell) and it became so popular that other wine growers and the city government eventually gave this name to its vineyard of origin, in the town of Zell.

In the mean time, where most wine producers from Zell just use a label with a black cat, Moselland Winery uses a bottle shaped like a cat to sell their riesling in. Not only does it come in your little basic black, but other colors, as well.  Yup, same wine, just different colors. And of course, like American cat lovers do, we try to collect them all. Yes, I have just the original black - so shut up.

It's not just the old world who has caught our eye with creative wine packaging, but some of the New World of winemakers have caught on to the American wine market. Australia has the lead on eye appealing and colorful wine labels. There are the "Bitch" wines with the pink labels, but not near as popular as Yellow Tail. The wines of Yellow Tail are the perfect example of how the American wine consumer got swept up by the marketing of this wine. It was developed around the year 2000, originally marketed to export countries (What? You mean that Australian wine lovers weren't going to drink this stuff?). In 2001, Yellow Tail sold 112,000 cases and became the number one imported wine to the USA by 2003. The distribution jumped to 7.5 million in 2005, helped by - - who else, but Costco. 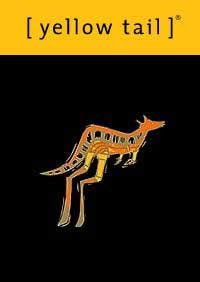 Are we that transparent to the Old World of wine producers? Young consumers in particular tend to avoid what they consider to be confusing and pretentious wine label characteristic of some Old World wines. As someone who loves marketing, I get it. I really do get it. We have the convenience of not only buying wines at the supermarket for one stop shopping, but also via the internet. The only luxury we typically do not have with this convenience is that we do not get to taste what is in the bottle before we buy, like we would at the winery.

So while a bottle of wine is sitting amongst a sea of wine bottles, at least a few bottles will stand out from the rest to the general wine consumer who is still learning about wines - - and most of all learning about their own palate.
Posted by wild walla walla wine woman at 12:55 PM

If you are interested in clever, eye catching labels on fine wine at a great price ($12 or less), made by actual small estate winemakers, look no further than GROONER Gruner Veltliner and ZVY-GELT Zweigelt. Made in Austria by a top winemaker, created and designed by 2 women who rep Austrian winemakers in the US. Unlike many new world countries, Austria has virtually no marketing money as everything they have goes into making extraordinary wine. We 2 women LOVE Austrian wine+wanted to spread the word in the US about Gruner Veltliner, as it's been in the US for 20 years, and most consumers don't know it. We came up with a way to brand the varietal: Phonetic name, eye catching label, descriptive back label, bright cases for stacking and a delicious hand crafted wine at a great price. Followed by ZVY-GELT Zweigelt. I highly recommed them.