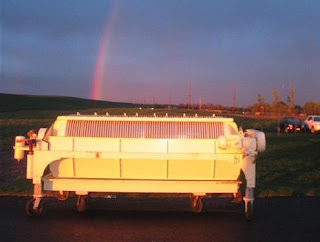 The word from Ashley at Flying Trout Winery is she's keeping busy with crush and it appears there is a rainbow at the end of her '07 crush journey! I recently interviewed Ashley back in August for an article to be part of my new column, "The Tasting Room" in Walla Walla’s newest magazine," Lifestyles." At that time, the only wine she had available for sale was her Deep River Red - 2004. And during that visit, I discovered that Ashley is truly a one-woman-show. Winemaker, marketing director and tasting room attendant and if that isn’t enough, after this crush she will head-down to Mendoza!
Which reminds me - as of this week she is sold out of her Deep River Red blend and is officially closing the tasting room except on event weekends. The Flying Trout Winery door will reopen in May, 2008.

Keeping close to old world traditions, Ashley has planned her version of a Beaujolais party for November 17 at the Flying Trout Tasting Room/Winery. Known as "wine for the peasants" many centuries ago, Beaujolais Nouveau may not be released earlier than the third Thursday of November, according to French law passed in 1985. A traditional (and legal) bottle of Beaujolais Nouveau means grapes were handpicked from the Burgundy growing region, then followed by carbonic maceration, pressing, fermentation and then moved quickly to bottling and this all has to be done (only in France and to keep the Beaujolais Nouveau name) in time for the traditional release at midnight on the third Thursday of November. Hmmm - could this be the reason why Beaujolais Nouveau has often been the popular choice with the American Thanksgiving turkey? Good timing or planned by nouveau King of Beaujolais marketer - George Duboeuf (and that my readers sounds like another blog topic)?
Anyways - Ashley has put a new twist on her Beaujolais Nouveau party. Instead of the traditional Gamay grape that is normally used, Ashley will be producing a carbonically macerated Lemburger. There is only one barrel and what isn’t consumed at the party will be available for purchase until the end of November. I must be there! You don't see too many Beaujolais parties in Walla Walla.
Posted by wild walla walla wine woman at 7:14 AM