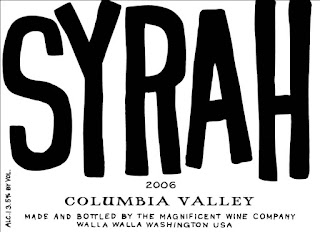 Okay, so it's not a catchy title, but I think we are all tired of the "Que Sera-Sera" reference and with no offense to Doris Day (okay, I know I am dating myself here - - ahem). It doesn't need much explaining other than, Walla Walla Syrah. That rather sums it up. So with that behind us, let's go down the list of Syrahs I have tasted in the last three weeks.

Wine lovers and critics from all over the nation are keeping an eye on Washington State Syrahs and in the last few weeks I understand why. Of course, being a proud native of Washington, that's a no-brainer, but I gotta say here - - we grow and produce some of the best!

Now I know this isn't a winery from Walla Walla, but the grapes sure are native. Barrister Winery from Spokane bottled a Syrah that received a gold medal at the 2007 Indy International Wine Competition and these winning grapes were from Morrison Lane Vineyard in Walla Walla. Morrison Lane Vineyards have been providing Syrah grapes to area wineries for several years. We were really fortunate not to have to go very far to taste this medal winner. Dean Morrison had a bottle of the award-winning Spokane-produced wine that he was sharing. Barrister only produced 115 cases and at a reasonable price of $26.

Barrister Winery co-fermented the small lot of Morrison Lane Vineyard Syrah with a touch of Viognier, making this wine a traditional Rhone-style wine. Aromatic with flavors of blueberries and plums. And best of all - - it tastes like Walla Walla fruit.
Just barely released, Forgeron Cellars is sure to come in first with their newly-released Syrah. For the short time this Syrah has been released, it is already gaining in accolades and favorable press. With two vintages behind them, this 2003 Syrah is going to be everything, if not more than the last two. I always love the smokiness of the Syrahs that Marie-Eve produces. To me, they seem so typical of well-made Rhones from France.
Last week I opened a bottle of Forgeron Cellars 2001 Syrah that I've been holding onto for a few years. Oh my! It was like drinking pure blueberry velvet, if you can imagine. And I feel that my timing for pulling that cork could not have been more perfect. In fact, I almost cried as I finally emptied the bottle. I can honestly say that every wine should be that elegant and smooth after seven years.
Cannot beat the bang for the buck with Syrah from winemaker Charles Smith (K-Vintners) of Magnificent Wine Company in Walla Walla. It's a quality wine with an affordable price. Perhaps they save their dollars by not using an expensive label? Kidding ...
So what can I say about Long Shadows Vintner's Sequel that hasn't already been said? Besides, that Long Shadows Vintners has been given the Best Winery of the Year award by Food & Wine magazine, the proof of the award is in the wines. I recently shared a bottle of Sequel - 2004 from my stash with long-time Walla Walla resident and wine connoisseur, H.H. "Dutch" Hayner. Dutch collects some of Walla Walla's finest wines and has been collecting since pioneer wineries, like Leonetti Cellars first opened. He thought Sequel was a wonderful wine and in fact, he went on the internet and ordered more! So how's that for a good reference?
Last, but certainly not least - Isenhower Cellars Syrah. We never seem to plan it but Isenhower Cellars Syrah or their Wild Thyme blend always shows up on our Thanksgiving table. It just seems to magically appear!
Two weeks ago we dined at Saffron Mediterranean Kitchen, one of Walla Walla's newest restaurants. It was just the very beginning of crush and yet the intimate dining room was filled with winemakers. I think they knew it was the time to party because in the next few weeks their days and nights would be limited. Norm McKibben of Pepper Bridge Winery sat at a table next to us and shared his bottle of Isenhower Cellars Wild Thyme - a blend of 60% Syrah and 40% Cabernet. Yes - - wine makers like to drink other wine maker's wine. It was yummy, jammy and paired perfect with the rich mezze spreads and wood grilled hanger steak we were enjoying.
Whether the grapes are from the major Columbia Valley region or the smaller region of Walla Walla, or even a combination of all, no matter. If the grapes come from Washington State and the Syrah is made in Walla Walla, chances are great that they are rich, aromatic and most of all - - world class!
Posted by wild walla walla wine woman at 7:40 AM