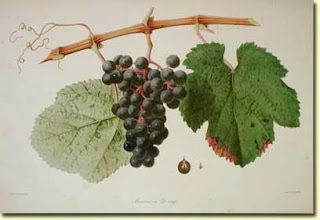 In France, it is often labeled as Côt and primarily used as a blending grape in Bordeaux. In Argentina, it is their signature grape and often labeled, “Malbeck.” In California, it has typically been a minor player and used as a blending grape in their Meritage® or other Bordeaux-style blends. But in Washington State - - it is finding a home and if the predictions are true, we are going to see more of this dark red grape in the state and not limited as a blending grape, but produced as a single varietal. Malbec loves the soil in Washington state as the climate and soil composition are similar to France.

Malbec is a medium to full-bodied wine and often very jammy in flavor. Usually flavors of dark fruit comes through, such as plums and blackberry. The tannins are there, but not so much like a Cabernet Sauvignon - - a bit tighter. And because this wine is often a bit rustic, it pairs well with the same type of "homey-style" foods such as - spaghetti, pizza, sausages, beef tacos, cajun dishes like jambalaya, and even beef stew. A French-style stew like Beef Bourguignon would make for a perfect pairing, especially if you used Malbec to marinade the beef instead of the traditional Burgandy.

Malbec is cropping up all over Walla Walla. In fact, this weekend I tasted two fine examples of Malbec - one from Walla Walla Vintners and also from their Mill Creek Upland neighbor, aˋMaurice Cellars.

The 2005 Malbec from Walla Walla Vintners was typical of the style of wine they produce - always dark in color, full-bodied and lots of flavor going on. Three vineyards were used (and in equal amounts) in the production of this 100% Malbec - Frazier Bluff, Sagemoor and Pepper Bridge. It was inky! It was spicy! It was jammy! Lots of plum and blackberry came through but it finished so velvety and kept on going. Nice - very nice.

Newly released, aˋMaurice Cellars Malbec - 2005, was deep red in color with aromas of bramble berries and vanilla jumping out of the glass. With one sip, you know the blackberries are definitely there, but so were the flavors of cassis and currants. Another sip gave me flavors of Chambord (raspberry liquor). A very delicate and elegant wine. A different style of Malbec from their neighbor's Malbec, but just as worthy. There are other wineries in the Walla Walla Valley producing Malbec and if I could make a prediction - I would predict there are vineyards in Washington State pulling out their Merlot vines to make room for Malbec. Cheers!
Posted by wild walla walla wine woman at 7:53 AM

I'm a web designer so I think I'm a pretty saavy person as I surf the net...but damned if I can't find a search option on your site! There is a petite sirah (2004 Concannon) that I wanted to get your opinion on.

The search option is at the top of the blog. But sorry to say I cannot give you an opinion about the California wine from Concannon Winery - This isn't the Walla Walla Grape Vine blog for nothing.

Hi. Do you have any idea whey they started planting Malbec in WA?
Thanks!

Hi Nancy, When or why? I am taking a guess, but I would have to say that Malbec probably started in Washington State in the late 1990's. It seems to be when several of the grapes in the state started flourishing.
And why? It's a easy red wine on the palate unlike other Bordeaux-style wines like Cabernet Sauvignon and it's ummm - - well - - easier to pronounce!
Cheers,
C~