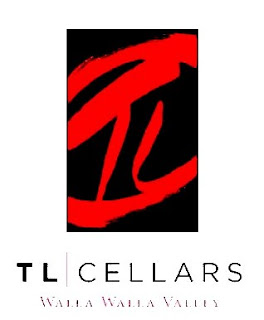 It’s bold. It's lush. Troy told me to open the heavy dark bottle ahead of time and let it breath for a couple of hours before serving. He was wrong. I should have decanted it earlier in the day! It was so bold and holding so much character, I knew I had a stunning wine in my glass especially when out of the three guests I served it to the "non-red" wine drinker said, “ I am surprised. I really like this. It doesn’t make my mouth pucker. It’s s-o-o-o sm-o-o-o-th.”

We were holding in our wine glasses, TL Cellars "Release Two" Cabernet Sauvignon 2005 produced with the very distinctive grapes from Les Collines Vineyard. As the dark liquid poured from the bottle into the glass, it reminded me of black ink until I saw the red hue in the glass. My nose didn't decieve me either, as I knew this grape came from Walla Walla soil. I could smell the wonderful "wheatiness" and essence de pétrole that is often so dominant in the soil that surrounds the foothills of the Blue Mountains - the soil that is such a reminder of Walla Walla's rich farming history.

The longer I held this glass of wine in my hand, I kept picking up other aromas that were so familiar to me such as smoke from slow burning apple wood, hints of a cigar humidor, oven warm blackberry cobbler and the king of extracts - Mexican vanilla. My "non-drinking" red wine friend was right about this wine as once the wine fell on the tongue it indeed was smooth. Yet, it still danced around a bit on the palate showing off its many flavors. We picked up flavors of dark ripe cherries, hints of fresh black licorice, and blackberries. With one of the sips, a flashback from days past came to me as it reminded me of toasted whole wheat bread slathered with currant jelly made from the currants we use to pick with my grandmother.

The finish was lingering and juicy leaving the palate wanting for more. This is a wine that will no doubt just keep getting better and always showing something new. It's been quoted by the winemaker this wine is "sex in a bottle." If "sex in a bottle" means being satiated and content, but greedily wanting more? Then it is - - sex in a bottle.

I would be lying if I said the character of the wine surprised me, but my instincts told me it was going to be an elegant, yet bold wine. I mean - how could it not be? Troy Ledwick, owner and winemaker of TL Cellars attended the Walla Walla Institute for Enology and Viticulture and it was there he had the good fortune to be mentored by the late and very great Stan Clarke. Stan assisted Troy with finding jobs during the seasonal "crush." And while working at some of the finest wineries in the valley such as Forgeron Cellars, Basel Cellars, and Long Shadows, Troy was often presented with opportunities to learn some of the winemaking styles from these winemakers.

There were only 792 bottles produced of the TL Cellars Second Release Cabernet Sauvignon and rightly so. This is truly such a special wine that there shouldn't be that much "sex in a bottle" being taken for granted.
Posted by wild walla walla wine woman at 12:00 PM