Don Carlo Vineyard: A chip off the old ...

It used to be the most indulgent and extreme snack was Champagne and popcorn. However, I have recently discovered a new extreme and very addictive snack and it happened to be developed right here in our valley – Don Carlo Vineyard Chardonnay paired with Tim’s Cascade Style Potato Chips warmed up and sprinkled with grated parmesan cheese. And it’s 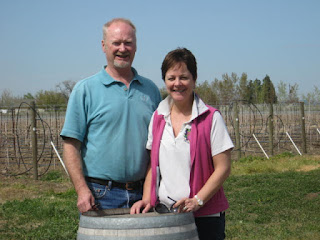 even better if you get Tim Kennedy himself, the founder of Tim’s Cascade Style Chips, to fry up these golden crunchy potato chips fresh for you to pair with his wines.

Lori and Tim Kennedy are no strangers to our area and no strangers to wine. Lori’s grandfather, Carlo arrived in the United States from Italy and eventually settled in the Pacific Northwest Italian area of Seattle bringing his winemaking passion with him. Lori has fond memories growing up surrounding her family making wine. Tim eventually retired in 2005 from his 20-year chip making business and came back home to his roots in Athena, Or, which is 20 miles from Walla Walla.

In 2007, Lori and Tim purchased an old Milton-Freewater homestead near the Seven Hills Vineyard. The homestead also included an apple and cherry orchard. The first ten blocks of their vineyard was planted in Chardonnay and two acres of the 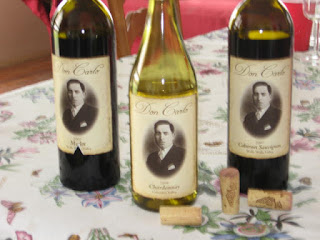 old cherry trees were pulled and replaced with Cabernet Sauvignon and Cabernet Franc vines. The modest bungalow on the property is now the Don Carlo tasting room and headquarters.
In many ways, this area has now come full circle as Don Carlo Vineyard's neighbor is the Pesciallo family who bonded the Blue Mountain Vineyards, the first commercial post-prohibition winery in the Walla Walla Valley. They produced Black Prince (aka Cinsault) and other Italian varietals for several years before succumbing to economics and climate in the 1950's.

At this time there are three Don Carlo wines released. Tim’s snack making talent has also grown into a wine making talent, which includes: 2008 Chardonnay, 2007 Cabernet Sauvignon and a 2007 Merlot. Lori's grandfather's wedding photo is the face of the Don Carlo Vineyard label. The wines are affordably priced and the Cabernet Sauvignon and Merlot are produced from Walla Walla fruit. Already the Cabernet and Merlot have been getting their share of gold and silver medals. I also got to sample a preview of their 2009 Estate Chardonnay. Oh, did it ever speak to me. I’ve been thinking about it ever since.

The new tasting room is filled with memories of Tim’s potato chip making days with a sculpture of the original red and white striped signature bag, as well as water color paintings of the snacks and potato chip bags. I had to ask Tim if he missed the chip business.

“People in the wine business are less competitive than in the snack business,” Tim said. “Driving a tractor adds years to your life.”
Posted by wild walla walla wine woman at 7:59 PM

It was a fun day Catie. I loved getting to meet you and sharing in the visit to Don Carlo's. The future looks full of promise for this new adventure for Tim and his wife.

I am a big fan of finding fun food and wine pairings. I havent had the Don Carlo Vineyard wines - but I'm willing to give them a try :)

Whoever thought that wine and hot potato chips would be our new favorite wine & food pairing?