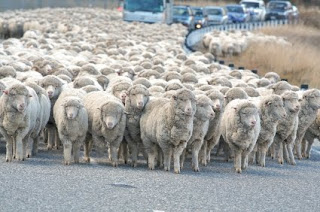 Another Spring Release is behind us and I must say, if getting stuck in bumper-to-bumper traffic on Highway #12 on Friday afternoon and evening is any indication of how many people came to town, I would have to say that Walla Walla Spring Release 2010 was a success!

As always, "there were so many wines and so little time" and I didn't make it to all of the ones on my list. I suppose in many ways, I have taken the wines of Walla Walla for granted, unlike my wine blogging collegue from the west, Sean Sullivan of the Washington Wine Report, who also let me hang with him on Friday afternoon. (or did I let him hang with me on my turf?) We had a friendly "spar" going on about who could blog about more Walla Walla wines in a year (and even Washington wines), but then again, someone would have to take the time to really care and to count them - meh! But fun aside, Sean had a precise, but impressive schedule and made the most of his limited time in Walla Walla. I am looking forward to reading his report, as always.

These rosés are all limited productions so "gather ye rosés while ye may ..."
In the mean time I will go over the highlights of the wineries I visited and choose just one wine from each winery.
Abeja: 2008 Beekeeper's Blend. Abeja is known for quality wines and for the dollars and quality, you cannot go wrong with this popular wine. A blend of 78% Cabernet Sauvignon, 12.2% Merlot, 4.9% Cabernet Franc and 4.9% Petit Verdot. Supple and yummy with notes of coffee and green peppercorns. $21
Bergevin Lane Vineyards: 2006 Intuition Reserve. A high-end blend of 70% Cabernet Sauvignon, 18% Petite Verdot, 10% Cabernet Franc, and 2% Merlot. A rich Bordeaux-style blend with all of the right components going on - earth, minerals, acids and tannins. $55
Couvillion Winery: 2007 Equilibre Red. 70% Cabernet Sauvignon and 30% Petit Verdot. Spicy, chocolatey and a mouth full of cherries. Jill's new addition to her winery looks great and so does her flower garden. $25
K-Vintners: 2007 K Syrah Phil Lane - Walla Walla Valley. Smoky, violets, and bloody with a long finish. A very personable and friendly tasting room staff, but the "rock star" wasn't there. My friend and wine blogger collegue Thea from Luscious Lushes - A Wine Blog tells me she was able to see Charles the same weekend at the Hospice du Rhône in Paso Robles, CA and was quite taken. It makes her all the more excited, she says, to visit Walla Walla at the Wine Bloggers Conference in June. She probably won't see him again, but at least she will have his billboards to stare at. $70
Locati Cellars: 2007 Innovation - Super Tuscan Style (Barbera, Sangiovese, and Cabernet) with fruit from the Columbia Valley. Brambleberries, currants and chocolate. A wine that should be passed around the dinner table and will hold up to a rich tomato gravy and spicy meats. Another highlight was their pre-party catered by Cugini's Deli and of course featuring Locati Cellars own grilled asparagus.
Mannina Cellars: 2008 Birch Creek Merlot. Immediately, the nose told me it was Walla Walla fruit with its earthy and smoky tones. The other highlight was tasting the new releases during an evening event at Mannina. Graze Catering did a wonderful job. I couldn't decide which I craved more - the garlicy ham and cheese pannini's paired with the Cali red blend or the Sangiovese paired with shish-kabob wraps of beef, grilled red pepper, spinach and provolone. $25
Robison Ranch Cellars: Okay, what can I say but they provided their usual and oppulent feast! Cheeses, salmon, ceviche, ham (choice of Tennessee or Virginia), corn beef, pork loin, bacon wrapped pickled watermelon (yum!) and ... and ... Okay, back to the wine. 2009 Viognier from Dwelley Vineyard in Walla Walla. Notes of pear, stoned fruits and honeysuckle leaving a finish of creme brulee. $19
Rulo: 2009 Combine - a blend of 96% Sauvignon Blanc and 4% Muscat Ottonel. Nose of grapefruit, honeysuckle and "pisse d' chat." Crisp, lemongrass and gingery on the palate. As always, their imported cheese assortment ruled. I threatened to knife any fingers who got near the Manchego as long as I was in the building. $15
Sleight of Hand Cellars: 2008 "The Spellbinder" 42% Cabernet Franc, 21% Cabernet Sauvignon, 14% Syrah, 12% Merlot, and 11% Sangiovese. Ooohhh how the Cab Franc spoke to me. Full bodied and such a great wine for the dollars. Screw cap and food friendly. $19

SuLei Cellars: It was a must that I check out their new downtown tasting room. The big release for Tanya and Elaine was their 2008 Roller Girl Red, inspired by the new local roller derby team, Walla Walla Sweets Roller Girls. Big fruit from Les Collines and Lodmell Vineyards. A Bordeaux style red blend of 48% Cabernet Franc, 41% Cabernet Sauvignon, and 11% Merlot. It was a mouthful of berries with caramel and tobacco notes. Luscious for $17

Tranche Cellars: 2005 Slice of Pape. Walla Walla's answer to the great Châteauneuf-du-Pape. A traditional southern Rhone style blend of 56% Grenache, 38% Syrah, 5.5% Counoise and a skoosh of Viognier. Elegant. Raspberry and tobacco nose and a palate greeting you with smoky and dark cherry cola flavors. Tranche also greets you with a beautiful grassy view. $35

Trio Vintners: 2006 Mourvèdre. Okay, I didn't taste this during the big weekend, but I did sneak a visit to sample Trio a few days before. Does that count? It's distinctive with dark earthy flavors. A mouthful of wild blackberries and a hint of violet on the nose. It left with a spicy, yet long finish. I sampled it with a lamb sausage and marinara dip. $26

Trust Cellars: Like Pee-Wee Herman says, "If you love it so much, why don't you marry it?" Again, Steve Brooks has another winner with his 2007 Cabernet Sauvignon. I loved it. Balanced and elegant. A palate of dark chocolate covered cherries with a creamy liquor center. Swoon worthy! $36

Walla Walla Vintners: Okay, so call me easy. Hellooo Easy! But I cannot get past their 2008 Cabernet Franc. I have been coveting bottles of WWV Cab Franc since their 1997 release. As always, Myles and Gordy's new vintage didn't disappoint. Cherry cola, chocolate and creme brulee flavors with a hint of the "green" that I love so much about Cabernet Francs. Complex! And believe it or not, but two weeks before WWV Cab Franc was paired for me and my guests with lobster in a saffron scented stock ala Chef Bear at the Marcus Whitman. A pair made for Bacchus and a Mermaid. $28

Okay, so come Sunday I was pooped! Oh well, fiddle dee dee. After all, tomorrow is another wine drinking day in Walla Walla.

(Stay tuned - a video with Spring Release highlights will be coming.)

Posted by wild walla walla wine woman at 6:47 AM

Hope you enjoyed the rest of the weekend. Can't wait for the Wine Blogger's Conference!

Ha! Oh dear, I hope I gave you the right cell phone number. I often forget. Well, I never call myself ...

It was great fun and for sure we will do it again. Counting the days until WBC10!

Hey Catie,
Glad to hear you will be joining us on Monday!

I only made it to three wineries, but now I am sold on making summer jaunts to your valley!

I love that you get to jaunt about and have such a good time tasting all our wines in the valley. OK I am flat out jealous. Thanks for making me feel like I was almost there. I gotta get out more often...arrrghh...if only I wasn't chained to my own winery....:)
Cheers,
Denise (Trio)