The other day, Dr. Deb Harkness of the award winning wine blog, Good Wines Under $20 announced her newest project, A Discovery of Witches. This new book will debut from Viking Press in February 2011. It is a novel about an ages-old vampire, a spellbound witch, and the mysterious manuscript that draws them together.

Last summer at the wine blogging conference in Santa Rosa I finally got to meet and spend some time with Dr. Deb on one of our long bus excursions. Deborah Harkness is a Professor of History at the University of Southern California and is a historian of science and medicine from antiquity to the present. I first got acquainted with her online when she asked the big question on her blog as to why we only see male contributors at the Wine Spectator. It created a bit of a shake-up. 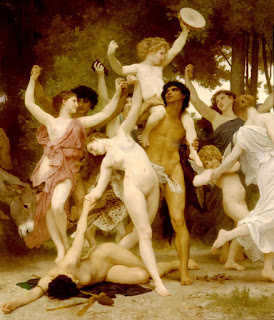 As I was reviewing some of her research she posted on the Discovery of Witches Facebook page, there was one comment she posted in regards to Bridget Bishop, a woman that was hanged on Gallows' Hill near Salem, MA in 1692 for the crime of witchcraft. It seems as if Bridget Bishop's crime was flaunting convention, wearing clothing that others didn't approve of and most of all, Bridget spoke her mind. Women who spoke their mind were perceived as dangerous women.
I commented to Dr. Deb that I was happy women wine bloggers weren't back in the time of witch burnings or many of us opinionated ones would be toast. She commented back to me that she thought a lot about me while she was writing it. Would I have been hung at the gallows or burnt at the stake for writing a wine blog?

In the 1960's and 1970's when the woman's movement was taking place, I was in junior high and never understood what the commotion was all about. Several years later, I looked back at this time and realized my father was way ahead of Betty Friedan, author and co-founder of National Organization for Women (NOW). He was one of the original "women libbers." There were no male or female "jobs" in our household when I was growing up. My father spent just as much time in the kitchen as my mother did. He believed that little girls could wear pretty Sunday school dresses and anchor a slimy worm on the end of a fish hook at the same time, and often he would be the one starching and ironing the frills of those pretty little Sunday dresses. When the youngest of my siblings were born, Dad changed his work hours to manage the household, so my mother could go back to college to get her teaching certificate. This was pretty "hip" when you considered our TV role models were Ward and June Cleaver. Ward came home from work and immediately sat to read the paper while June continued her work day until the last dirty dish was washed, dried and put away. Most of all, I remember my father teaching my siblings and me to have opinions and speak them loudly, reminding us that nobody would do it for us and especially, as well.

When I first started blogging about wine, there were just a few women blogging away. In fact, I had that very discussion with Alice Feiring when I had the privilege of meeting her a couple of months ago. Like most of the wine industry, from media print to winemaking, it was definitely a man's world. Within a few years later, it has changed and it especially pleases me as I look through the list of the 2010 Wine Bloggers Conference of participants and I see the many women who will be in attendance.

A special shout out to some of the women in the Northwest who have been known to get a little sassy and flaunt convention: Tamara Belgard, Barbara Evans, Melinda Knapp, Shona Milne and Margot Savell. For sure, you won't see them attached to any burning stake, as they are already too hot to handle! Ssss ...
Posted by wild walla walla wine woman at 2:57 PM

I always say that when you speak up you make a difference--that goes for Bridget, wine bloggers, and everybody else, too. Thanks for the mention, Catie, and have fun with all those fine women in Walla Walla. Wish I could be there!

Thank you for this article. I always ask the unconfortable question: Where are the women? I wonder why today I still ask this question as women are still frequently invisible. Yes, we both would have been burned at the stake or hung. Hooray for women wine bloggers. How many will we count this weekend?
PS I minored in Women's Studies at UW.

Thank you for mentioning me in your post. I am proud to be a WA wine woman blogger! I have had the privilege of meeting most of the ladies you listed and look forward to meeting you and Tamara this weekend!

Jumping up and down with happiness after reading this. Sing it sista!!