Hang On To Your Hat. It's Nine Hats from Long Shadows

If you are familiar with Long Shadows Vintners in Walla Walla, then you probably know that the winery is a group of famous winemakers from around the world who have been producing highly rated wines from Washington State fruit since their first releases in 2003. The names of the Long Shadows wines are: Feather, Pirouette, Pedestal, Sequel, Saggi, Poet's Leap and Chester Kidder. 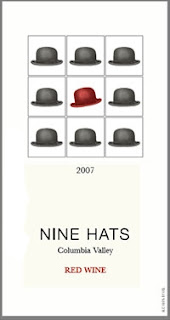 So if you have a few extra barrels of highly rated Long Shadow's 2007 vintage hanging around, such as their Sangiovese, Syrah, Cabernet Sauvignon, Merlot, as well as an additional Petit Verdot, Cabernet Franc, and Malbec, what'cha suppose to do? You make a damn good red blend out of it. You know - - something that you can hang your hat on.

And that's exactly what Long Shadow's did. "Nine Hats" is a blend of 60% Cabernet, 15% Syrah, 11% Merlot, 10% Petit Verdot, and 4% Cabernet Franc. Of course, if you have had any of the Long Shadows red wines, then you know they are big and ripe, and "Nine Hats" is no different. A mouth of dark fruits such as cherries and plums appear with flavors of espresso, cocoa and a bit of ye' ol' cigar box. This blend almost leaves that signature, "Yup this is a Washington wine" on your palate.

"Nine Hats" is the best of Long Shadow's with an affordable price. In the mean time, I have been staring at the label thinking there is one extra Derby. The red Derby in the middle of the label has to belong to Allen Shoup, himself, the founder of the Long Shadow's partnership and also one of the founding fathers of the Washington wine industry.

We tip our hats an' raise our glasses.
Posted by wild walla walla wine woman at 8:15 AM

This is one of my recent favorites. So good...and kind of a secret find!