Seven Hills Winery - One of the Originals

Fall Release in Walla Walla is just around the corner. Many wine enthusiasts are taking note of the newest wineries around the valley and adding them to their list of wineries to seek out. But while you are making a list, don't forget to visit and re-visit some of the originals in the valley.

Seven Hills Winery is one of those "originals" in the Walla Walla Valley. The winery was 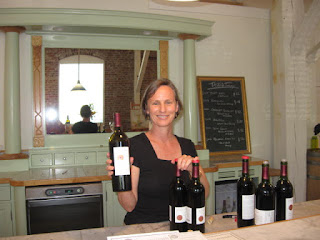 established in 1988 by Casey and Vicky McClellan (Vicky - right photo). In 1982, Casey joined his father in planting the original Seven Hills Vineyard, which has since expanded with new owners and known as one of the ten greatest vineyards in the world. One has to wonder if Casey realized at the time he was participating in Walla Walla wine history in the making.
Seven Hills Winery has helped put Walla Walla on the map with their Cabernet, Merlot and other Bordeaux-style red varietals. The McClellans now have 20 acres of vines adjacent to the famed Seven Hills Vineyard. In addition to their estate wines, they also produce vineyard-designated wines from other celebrated vineyards in the Columbia Valley and Walla Walla AVA's. Surprisingly, they also produce a Pinot Gris with fruit from Oregon. 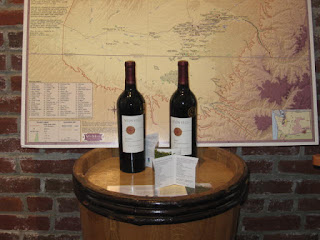 The winery and tasting room is located downtown Walla Walla in the historic Whitehouse-Crawford building at 212 North 3rd Ave. The old woodworking mill and furniture factory was built in 1904 and in 2000 the old brick building was remodeled to house, not only Seven Hills Winery, but also the popular Whitehouse-Crawford restaurant. Visitors to the winery and the restaurant can view the working barrel room from the large glass windows.
This weekend add one of the originals to your list and taste the newly released vintages from Seven Hills Winery:
Ciel du Cheval Vineyard, Red Mountain Vintage Red - 2008
Pentad, Walla Walla Valley Vintage Red Wine - 2006
Carmenere, Walla Walla Valley - 2006
Cheers!
Posted by wild walla walla wine woman at 8:28 AM