Take a Stroll to Nicholas Cole 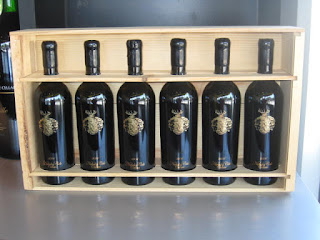 Stroll up Main Street in Walla Walla and on the corner of Main and Palouse streets you will find Nicholas Cole Cellars. The winery is very much about family and it shows in the name of the winery and the wines - even the majestic gold "NC" insignia resembles a crest which often stands for history and heraldry of family generations.

Owner and winemaker, Mike Neuffer took a thoughtful approach when naming his winery after his son and daughter, Nicholas and Michele Cole. The beautifully named artisan winery is devoted to complex and concentrated red wines. The first release for Nicholas Cole Winery was a 376 case production of a 2001 Bordeaux-style blend, a Claret, which immediately put the winery on the Walla Walla map. Production of this blend was later increased with the next vintage and Mike changed the wine's name to "Camille," in honor of his grandmother. The arrival of other bold and elegant wines, named after family members, continued.

Jeanie Inglis-Chowanietz, general manager of Nicholas Cole strolled me through the wines: 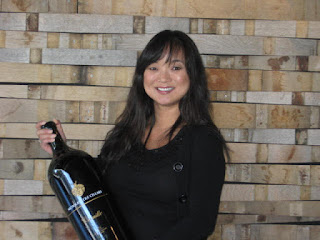 Camille - 2005: This is the wine that started it all for Nicholas Cole. A blend of 45% Merlot, 28% Cabernet Franc, 26% Cabernet Sauvignon, and 1% Petit Verdot. It is rich and silky with notes of milk chocolate and spice.

Michele - 2006: "Rich and Ripe" are the two words to describe this classic blend of 69% Cabernet Sauvignon, 12% Merlot, 11% Cabernet Franc, and 8% Petit Verdot. Smells like an autumn evening in the Walla Walla Valley. Black fruit of plum and cherries show off with hints of cocoa and cigar box.

Dauphiné - 2006: Like the name, this wine is stunning. A sophisticated Rhone-style wine of 100% Syrah. Dark and smoky with notes of blueberries, espresso and spice. Reminded me of brunch in a snowed-in cabin with a menu of blueberry waffles, bacon and a double espresso latte.

Juliet - 2006: Unfortunately this wine is now sold out. Boo-hoo! Named after Mike's sister, this wine may be elegant, but it is super! Super Tuscan, that is. 53% Sangiovese, 24% Cabernet Sauvignon, 16% Cabernet Franc, 4% Merlot, and 3% Petit Verdot. Spicy!

GraEagle RedWing - 2006: Mike has the right touch with his blending. 38% Cabernet Sauvignon, 35% Cabernet Franc, 18% Merlot, 6% Syrah, and 3% Petit Verdot. An affordable wine for $25, yet it doesn't taste so "affordable." It tastes like a million bucks!
Estate Reserve - 2005: Last, but certainly not least. This wine is the "million-dollar baby" with a blend of 78% Cabernet Sauvignon, 17% Cabernet Franc, and 5% Petit Verdot from the Neuffer Estate Vineyard in the Walla Walla Valley. Only 200 cases were produced of this instense and complex blend. A mouthful of chocolate cherries and rich cherry liquor. Velvety.

Visit Nicholas Cole's tasting room and check out the recycled, yet attractive, barrel stave paneling. Once you taste the wines you will understand why their motto is: Great wines are made ‘one vine at a time.’
Posted by wild walla walla wine woman at 8:15 AM