It's Not About the Romance: Tamarack Cellars

If you are a lover of Walla Walla wines and haven't noticed all the ongoing accolades given to Tamarack Cellars, then you must have been sleeping.

Tamarack Cellars was founded in 1998 by Ron and Jamie Coleman. No, they don't have a poo-foofy-looking chateau and no, they do not sit on a hill overlooking pristine and perfect movie set vineyards. Located in the old World War II 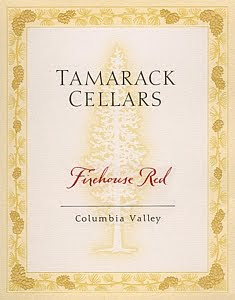 Army Airbase fire station at the Walla Walla Airport, this winery is all about expression, passion and character - with no pretense.

Focusing on small lots, the winery is currently at 20,000 cases a year. The goal of the Coleman's and their winemaker, Danny Gordon is to continually produce elegant and balanced wines at, best of all, affordable prices.

The acclaims, and especially from 2011, have been almost endless. Their "Firehouse Red," appropriately named, has been an all-time favorite with Wine & Spirits Magazine.

Firehouse is traditionally a Bordeaux-like blend with Syrah "tossed" in. It is really an elegant easy sipping wine and makes for great "meat" influenced dining, such as paired with my favorites: boeuf bourgignon (need two bottles - one for the casserole and one for drinking) and grilled flank steak. The ultimate standing rib roast is a perfect pairing and the price of the wine makes the roast even more affordable since Tamarack's Firehouse Blend is priced under $20.

Wine Spectator Magazine gave Tamarack's Firehouse Red a mention for their article on "Big Holiday Ideas" as well as one big final hurrah of the year in their December issue of the Wine Spectator's Annual List of Top 100 Wines of the World, listing Tamarack Cellars Cabernet Sauvingnon - 2007 at #39.

If you are a novice who is just beginning to love and learn about wines or a seasoned oenophile, it is important to note that the guarantee of an exceptional wine isn't about the shiny new chateau and the ethereal scene of clouds lingering through the picturesque vineyards. The true and most final experience is about what the bottle holds inside - and the wines from Tamarack Cellars are the perfect examples of wines with character made by people with passion.
Posted by wild walla walla wine woman at 8:00 AM