It's a grape you don't see lingering much on a wine shelf, but when you do and if you are a lover of Bordeaux-style wines, grab it! 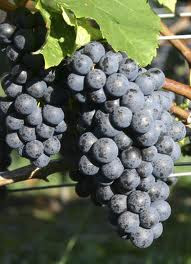 The history of Petit Verdot is thought to have predated Cabernet Sauvignon in the Bordeaux region. As I was doing some sleuthing on it, Petit Verdot has been linked to the Duras and the Tressot grapes.

Duras is a French variety mostly grown around the Tarn River, northeast of Toulouse. It is usually blended with other traditional red varieties, but production has been declining in recent years.

The Tressot grape is a dark skinned varietal that has been historically grown in Burgundy, but now almost extinct. Possibly some small vineyards still remain in the Chablis area of Burgundy.

Petit Verdot often ripens much later than the other varieties in Bordeaux, and often so late that it fell out of favor in Bordeaux. When it does finally ripen, it's been typically added just in small percentages to add stout tannins, concentrated color and richness to Bordeaux blends, especially in the New World.

I just love pronouncing the name and of course slowly sipping on a glass as well, especially a glass of 100% PV. We are seeing this grape slowly coming back into favor, not only in the United States, but also in Australia, South Africa and Argentina. And speaking of United States, we are seeing PV in the state of Washington and especially here in Walla Walla! 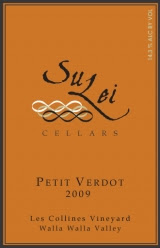 some of the most recent that have bottled 100% Petit Verdot - - and now SuLei Cellars has made it on the PV list of producers.

The SuLei (soo-lay) Cellars Petit Verdot is a deep garnet color that opens with perfumey nose of violets followed by aromas of dried cranberry and a hint of sandalwood. Rich dark fruits of plum and black berries, along with leather, round out into a rich mid-palate and finishes with a black pepper finish. The wine was unfiltered to show off the natural accents of the concentrated nature of this wine.

Think proteins when pairing with food. I would pair the Su-Lei Cellars PV using foods that are fatty and full of protein. Rich foods! The best cuts of red meat and especially wild game. Stilton cheese and other well-aged cheeses could stand up to this dark beauty and even a heavy chocolate mousse to finish out the meal.

Of course, this type of a meal, along with the richness of the wine, isn't the kind of dining that you would do everyday, but it is certainly worthy of a celebration or a romantic dinner for two. Enjoy!
Posted by wild walla walla wine woman at 8:01 AM