In the December 15, 2011 issue of the Wine Spectator's, their cover and leading article was titled, "Malbec's Moment." It's about the forgotten grape that has become an overnight success, especially in Argentina. 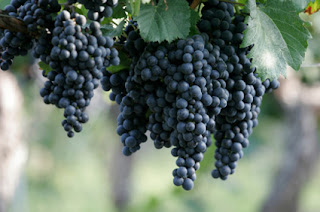 Malbec is a red grape variety that produces an inky dark purple colored wine. It has been long known as one of the six grapes allowed in the blend of Bordeaux reds. The French vineyards of Malbec have primarily been found in Cahors in the South West France region and known as either Auxerrois or Côt (Côt Noir) in Cahors, called Malbec in Bordeaux, and Pressac in other areas. In Walla Walla we call it - - yup, you got it - - Malbec.

This dark purple grape became less popular in Bordeaux after 1956 when frost killed off 75% of the crop. Despite Cahors being hit by the same frost, which devastated the vineyards, Malbec was replanted and continued to be popular in that area where it was mixed with Merlot to make dark, full-bodied wines. Just recently it has been made into 100% Malbec varietal wines.

While acreage of Malbec was declining in France, in Argentina the grape became popular and soon to be known as their "national red variety." Malbec was first introduced to Argentina in the mid-19th century. The Argentina government brought over grapevine cuttings to their country from France. Eventually Malbec became very prominent in this South American continent and today it is the most widely planted red grape variety in the country. There are now over 50,000 acres (20,000 hectares) of Malbec growing in Argentina and their most celebrated grape varietal.

To describe the nuances of Malbec, I will describe it rather simply, just as wine sensory diva, Dr. Anne Noble, Emeritus of UC Davis suggests, "Reach deep into your memory and pull out aromas and flavors that you remember from your past to understand the sensories of wine."

When I smell a Malbec, I know it is going to be the right Malbec for me when I get notes of homemade Concord grape jelly on graham crackers. My only explanation for this description is being at my grandparents small farm in Walla Walla and graham crackers and grandma's homemade jelly from her grape vines being one of the favorite snacks amongst us grandchildren.

In Walla Walla, Seven Hills Winery planted the first vines of Malbec on the Washington-Oregon border in the late 1990s in the Windrow Vineyard located in the Walla Walla Valley AVA.

When I think of a true Walla Walla Malbec, I often think of winemaker Ashley Trout of Flying Trout Winery. She was one of the originals when it came to producing Malbecs. In fact, Ashley, who has been making wine since she was 18 years old, would eventually be lured south to Argentina for their annual crush. She would fall in love with this red grape and started her bi-annual and bi-hemispherical crushing for her Flying Trout wine line-up.

One could say that Ashley's Malbec became full circle, as she would eventually partner up and become the assistant winemaker for Tero Estates Winery. Tero Estates is owned by Jan and Doug Roskelley and their company is now the proud owners of Windrow Vineyards. In fact, Flying Trout Malbec is now "home" as it is located on the property of where the original Walla Walla plantings of Malbec took place - Windrow Vineyards.

There are other great Malbecs in the valley. To name a few of my favorites:

aMaurice Cellars - 2008: Spicy with grape jelly & graham cracker aromas. Sells out fast!
Ash Hollow Winery - 2007: So thick and rich you could stick a fork in it. Best kept secret.
Saviah Cellars - 2008: Earthy and "purple-ly" with a bite of chocolate. Beautiful nose.
Skylite Cellars - 2008: Award winning and goes great with spicy dill pickles - seriously!
Sweet Valley Righteous - 2009: Bold and affordable for such a full bodied wine. All Walla Walla!
Wines of Substance - 2009: An amazing buy for such a wine of character. Worthy!
Tertulia Cellars - 2007: Smells of violets and tastes of mole'. I think of tradition with each sip.

To see more of Ashley and the Flying Trout Wines, check out:

Posted by wild walla walla wine woman at 7:59 AM

WineyWomen said...
This comment has been removed by a blog administrator.
10:02 AM