In the ever-changing, ever-evolving wine world of Walla Walla, it was announced yesterday that the first winery to fly the incubator coop has been sold. 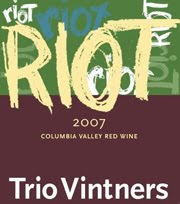 The original owners of Trio Vintners; Denise, Steve and Tim Boushey started their winery adventure in 2006 and were one of the first to launch at the Port of Walla Walla's winery incubator program at the city-county airport area. In time, the trio built a 1500 case production of more unique and limited releases such as Sangiovese, Mourvedre, Tempranillo and even Zinfandel. They would eventually build their brand, Trio Vintners, to be named "Hot Small Brand of 2008" by Wine Business Monthly. Last year the winemaking husband and wife team, Steve and Denise, found themselves as the "Dynamic Duo" when Tim left the trio.

My best to the new solo vintner, Karen La Bonte' of Trio Vintners and hopefully Denise and Steve will stick around the Walla Walla area and possibly find themselves a niche in the wine industry. They are truly two people that add in making Walla Walla a better and more interesting place.
Posted by wild walla walla wine woman at 8:52 AM

Thanks for your recap of our sale to Karen. We're all very excited. It's great to have been approached by someone to buy Trio - and that it was Karen - a fantastic local winery professional - is all the better. Yeah - we'll be around. I'd like to see what 2011 has in store for me. But for now - our family can breath a little easier and maybe dinner will get on the table at a decent hour! Seriously, I love working in this business and am open to staying attached in any number of ways. Steve - well, he's a fabulous Nurse, consumer of world class wines and in another life should have YOUR job as a wine merchant! We'll be on hand at Trio for the next few months....until our next meeting Cheers! Denise

No doubts the "Trio/Duo" handed the reigns to a capable "Solo".
Karen is a top-notch individual, and will keep this winery at the top.

Obviously a beneficial arrangement for all involved. Denise, Steve & Karen, I wish you all the best and hope see all of you soon in your new ventures.

Thanks, Catie, for keeping on top of the happenings out there in Eastern Washington.