It's been no secret that when I reach for a bottle of wine, I typically grab a Cabernet Sauvignon or Cabernet Franc. However, recently I have been screwing the ol' cork screw into the corks of many red blends. Glorious red blends that have no shame or tradition and can be fused with the sacred Bordeaux and the renegade Rhone. To me, a blend is often telling of the winemaker and of his or her style and craft. Somehow if that blend tasted excellent to the winemaker's palate, and I trust and know the winemaker, the blend is often a winner and a winner to celebrate as with each vintage and with each blend, you will never taste another bottle of wine like that again. 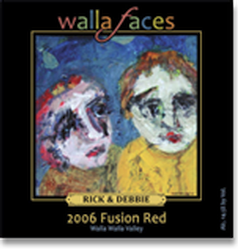 Walla Faces Fusion is one of those wines. Are you familiar with Walla Faces? When you walk into their tasting room on Main Street in Walla Walla, you immediately are taken with all of the happy faces that greet you, not only the staff, but the colorful and whimsical faces that surround you on canvas.

Candice Johnson is the featured artist of Walla Faces. She lived in Paris, France and it is there where she developed her painting style apprenticing under several well known Parisian artists. Candice began to create "Tetes," which is the French meaning for "heads" - small portraits of heads or in this case, faces - Walla Faces.

The label for the Fusion blend are the "tetes" of Candice's brother and sister-inlaw, Rick and Debbie Johnson, owners of Walla Faces.
It was a year ago when I first visited this Bordeaux-style red blend fused with Cabernet, Merlot and Cabernet Franc from the Walla Walla Valley. As I revisit it a year later, there is still the nose that is so prominent of Walla Walla terroir - aromas of autumn leaves smoldering in the Walla Walla Valley, like the fragrance of a cigar box, and big red ripe orchard fruit of cherries and dried dark plums. I noticed this time there were even flakes of sediment going on. (Note: We love sediment. It's a good thing.) The color of this blend now has a slight copper tinge - very slight.

You'll find on the back label of Walla Faces Fusion that Rick and Debbie found each other over 10 years ago and they work best as one - a Fusion. Cheers ~
Posted by wild walla walla wine woman at 8:17 AM