Once upon a time two local doctors, Dr Herb Hendricks and Dr. James McClellan planted a vineyard by the name of Seven Hills. It was also the first commercial vineyard in the Walla Walla area, since prohibition. In 1994, the vineyard was split in half - half of the vineyard was sold, along with the rights of the name, Seven Hills. The remaining half of the vineyard was renamed, Windrow. Since 1995, several Who’s Who of the Walla Walla Valley wineries have used the Windrow Cabernet Sauvignon for their outstanding wines. Thirty-years later, a new partnership was formed and they would eventually become the new caretakers of the Windrow vines.

In 2006, Jan and Doug Roskelley traveled from their home in Woodinville to check out the vineyards in Walla Walla. Much to their good fortune and surprise, they discovered that the old 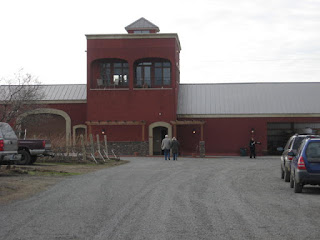 Windrow Vineyard was for sale. Later, partners Mike Tembreull & Doug Roskelley lent the first two letters of their last names to create Tero Estates. In July of 2007, the Roskelleys would make Windrow Vineyard their home. Doug immediately went to work rebuilding the old equipment shed into a winery. In February, I visited their “old equipment shed” located at 52015 Seven Hills Road in Milton-Freewater during the "Tero Estates Announcement Party." To my surprise, what I discovered was no old equipment shed. Instead, the old shed “shed” its cocoon and released a beautiful new winery. The top of the new winery holds a magnificent view of the surrounding vineyards and the Blue Mountains.
However, underneath the newness and the beauty still remains some of the old shed. If walls could talk, the old walls would tell its visitors how it was a part of Walla Walla wine history, as many of the original discussions about the formation of the Walla Walla AVA were surrounded by the old shed walls. 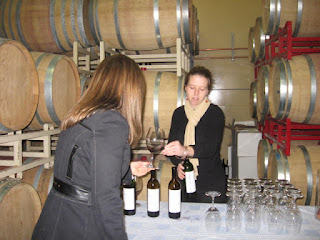 that wonderful sunny afternoon at the vineyards. We were met by a smiling Ashley Trout pouring her elegant Flying Trout wines. I tasted through her collection and I was very taken on how Ashley's winemaking skills just keep evolving. Her wines are sophisticated and complex. The big news was Flying Trout and Tero Estates have “merged.” Flying Trout’s new home is at the 52015 Seven Hills Road winery. Ashley now has the support and a facility she needs to continue to build on her outstanding wine portfolio. She will also act as a consulting winemaker along with Doug, who is the winemaker for Tero Estates. There’s Malbec on the Tero Estates and no doubt, Ashley will know exactly what to do with it – as she continues to 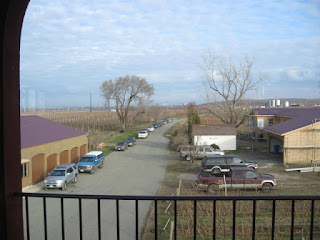 The country life has been good for Jan and Doug Roskelley. Not only is Doug busy as the winemaker for Tero Estates, but he is also designer and construction-dude for their new home on site, as well as expanding their vineyard. Jan is a gracious hostess and eager to get involved in "social media" on behalf of their winery. And this “once upon a time” beginning will definitely have a happy ending – with Jan and Doug living in the middle of a vineyard with two dogs and ten cats and they will all live together happily ever-after.
Posted by wild walla walla wine woman at 8:15 AM