The Dynamic Duo at Trio Vintners 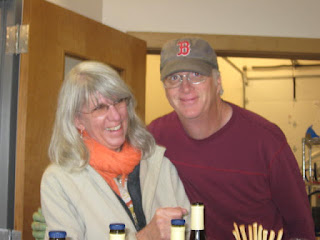 Spring Release 2010 is around the corner and there is big news at Trio Vintners. Denise Slattery and Steve Michener announced that they have taken on full ownership of Trio Vintners winery and all winemaking responsibilites.

Their winemaking and business partner of four years, Tim Boushey, has decided to move back to the west side of the state and pursue opportunities there. Steve and Denise are excited to take the reigns of Trio and make this a true family operation. However, it is clear that they are still very much a trio when you consider the real trio of their partnership is the triple combination of soil, climate and fruit. Listed below is just a trio of some of the wines they 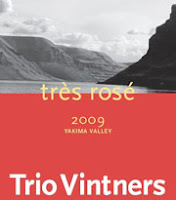 Once again Trio Vintners Tres Rosé (2009) will make an appearance at Spring Release. We also got a early sneak preview a week ago at Feast Walla Walla. There is just a skoosh of sweetness in this 50/50 blend of Grenache and Mourvèdre, sourced from the Far Away Vineyard in the Columbia Valley, and that skoosh makes it a pleasant afternoon sipper. Grenache brings to the wine Old World tradition and the dark Mourvèdre grape gives the wine a color Trio says you will want to paint your kitchen with. Rosés produced in the Walla Walla Valley have become a popular, yet limited wine, and you better not be a procrastinator if you want to grab a bottle. Tres Rosé is going to move fast! 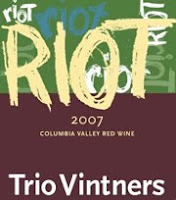 It's a Riot at Trio Vintners. RIOT (Trio spelled backwards)is the first ever red blend for the Trio and it's appropriately named as it's a riot in a glass! This affordable wine is an unusual blend of 52% Sangiovese, 36% Syrah, and 12% Mourvedre sourced from the Yakima and Walla Walla Valleys. A nose of spice and fresh cherries jumps out in your face. The Syrah speaks out with hints of blueberry and smoke. There is a youthfulness in the palate and yet the complexity makes it a very age worthy wine that you will want to revisit later. Can’t beat the price for the quality.

Tempranillo may be a Spanish native, but this red varietal has adapted well in the Walla Walla Valley at the Les Collines Vineyard at the 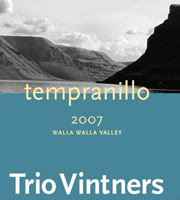 foothills of the Blue Mountains. The addition of 9% Carmenere and 8% Sangiovese, also from Les Collines, melds this 2007 deep red vintage together with aromatic spices of cinnamon and vanilla. Trio Vintners Tempranillo brings to the palate full flavors of black cherry, coffee and cola. It is medium-bodied and moves along with a smooth finish. Elegant.

Since 2006, Trio Vintners has created food friendly wines from small lot production using fruit grown throughout eastern Washington. They are known to challenge convention and indulge with lesser-known varietals, low-to-no oak, high natural acids and alcohol levels you can live with and enjoy food with. Unrestrained revelry? Not following the norm? Maybe - - but definitely a RIOT!
Posted by wild walla walla wine woman at 8:04 AM

Great work on this piece. Denise and Steve are awesome people (as you know).

I've enjoyed two of their wines and look forward to more. Thanks for your passion to promote the area.

Catie - Your headline of Dynamic Duo has sparked a lot of chatter with our crowd. OK, which one of us is Batman and which is Robin???? Well, personally, I think Steve is more Alfred but that's just my humble opinion. Hey - for what it's worth and for insiders, it's cool to note that the "original" Batman actually grew up right here in Walla Walla! Yep, I know you know that - but for any other peeps reading...Now, on to the Bat Cave! That's where we make our wine after all :)

Hi Josh,
Thanks for checking in and the kind words. I would say that you are doing a great job yourself promoting Washington wines.
Cheers,
C~

Denise,
That is so funny. I wasn't thinking about the Dynamic Duo in Batman/Robin terms, but I love you made that connection! So you think Steve is Alfred? Is it because he refuses to wear a pair of tights? Ha!
Cheers,
C~