I typically don't run a lot of press releases and if I do, I will often change things around. But today I am going to be guilty of reposting someone else's words - - well somewhat. I am still going to change words around (you know me), but overall I couldn't have said this any better. The press release is also about the Robison-Riordan Families. Yeah - I am rather fond of them.

One afternoon I was visiting with Jim Robison and although he is a third generation wheat farmer in the Walla Walla Valley, he told me how he liked the wine industry and how they have contributed to the valley. Enter family friend, Brad Riordan a wine and vine hobbyist. And yes - - I have sampled all of the wines. I recommend them. 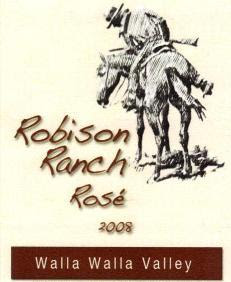 200 holes through pure river rock to plant new grapevines on his quarter-acre “hobby” ranch. Two years later, he became the winery partner of one of the Valley’s most established wheat ranchers, Jim Robison.

Brad's short path from a “quarter-acre vineyard and a mule” (the mule being Brad himself) to becoming a winemaker and winery owner is a true Walla Walla story. He studied winemaking “at the knee of a great teacher and person,” Stan Clarke, the former Associate Director at the Center for Enology and Viticulture at Walla Walla Community College. Third-generation rancher and successful Walla Walla businessman Jim Robison then discovered Riordan’s winemaking. Together they formed Robison Ranch Cellars.

Robison Ranch Cellars debuted its first vintage last fall with the single release of 2008 Rosé. The release has since sold out. This May, Robison Ranch Cellars will release its second vintage of Rosé and inaugural vintages of 2009 Viognier and 2009 Semillon. Later this fall, Robison Ranch Cellars plans to release inaugural vintages of 2008 Cabernet Sauvignon, 2008 Merlot, 2008 Spofford Station Syrah and 2008 Sangiovese. Robison’s first artist’s series wine, a 2008 Red Mountain Petit Verdot, will debut winter 2010. Brad is most excited by the 2009 Viognier and the 2008 Spofford Station Syrah.

The Robison Ranch Cellars winery facility is housed in a converted shallot production building on the 3,000 acre Robison Ranch, just 5 minutes from downtown Walla Walla. The winery sources grapes from several noted Walla Walla vineyards including Spofford Station, Dwelley and Blue Mountain and plans production of 500 cases for its 2009 vintage. On-site Winery events will be held twice each year (for Spring and Fall Release) in the historical shallot barn on the ranch. Winery visits are also available by appointment.

Stay tuned for more info regarding Spring Release and don't forget to check out their new website.
Posted by wild walla walla wine woman at 3:07 PM