It was football that took him away from his home town, but it was wine that made him double back.
When you are invited to an Inaugural Release and first Open House event for a wine by a former All-Star NFL quarterback in your minds eye there are visions of fans crowding a locker room, but this wasn't the case. The sunny afternoon in June was a friendly and casual atmosphere that allowed all of the guests time with the stars of the day and of course, all eyes were on the Doubleback Walla Walla Valley Cabernet Sauvignon - 2007. 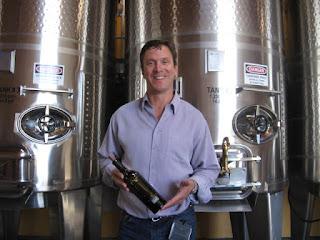 Drew Bledsoe is a "hometown boy" that many of us in the Walla Walla Valley have kept an eye on. We watched him play football at Walla Walla High School and we continued to watch him during his three-year football career at Washington State University before he was drafted in 1993 by the New England Patriots.  As if we all had ownership in him, I can remember how the draft became a big discussion even in the local coffee shops, "Should our hometown star quarterback have continued to stay in college to get his education or was being drafted by the NFL the best choice for him?"
Like many students in Eastern Washington, especially those attending WSU at Pullman, Drew's drink of choice wasn't wine, but that golden beverage that is often fermented with malted barley instead of grapes. It was in later years, after college, when Drew and his wife, Maura started ordering wine with dinner and discovered the fascinating  qualities in wine and even toured Napa Valley visiting with winemakers.  His passion for wine grew and at the same time he became fascinated by the tremendous growth of the wine industry back "home" - home being Walla Walla, of course.
In true Walla Walla fashion, we natives never seem to have a problem reconnecting with each other no matter where we live or what we are doing.  Kevin Bacon has nothing on us with his seven degrees of separation, because if you are from Walla Walla, we can connect within three degrees.  And that is exactly what happened with Drew Bledsoe and Chris Figgins, winemaker of Leonetti Cellar and  consultant/owner of Figgins Enological.  The two had grown up a "stones throw" away from each other and from their point of reconnection, it became a collaboration from dirt to bottle to form Doubleback.
In 2008, the McQueen Vineyard was planted in cabernet and merlot. The 52-acre partially planted vineyard is on top of a hill in the SeVien Vineyard project southwest of Milton-Freewater in the Walla Walla Valley AVA.  It was truly a family project as the Bledsoe children helped plant some of the vines. Compost tea and water practices are followed under the growing practices of VINEA, the Walla Walla Valley's wine grower's sustainable trust.  Doubleback is currently being made at Artifex Wine Company (a custom crush facility) in Walla Walla under the direction of Chris, with plans to build a winery on the McQueen Vineyard site in the near future, as well as completion of the vineyard.

Inside of the high shouldered dark bottle of wine, with its elegant logo of silver and gold arches signifying the monogram of Doubleback, is a Walla Walla wine in true character - the finest character, as the 2007 vintage is a blend of older Cabernet Sauvingon vines from the Seven Hills and Pepper Bridge Vineyards. Only 600 cases were produced and each bottle is numbered. 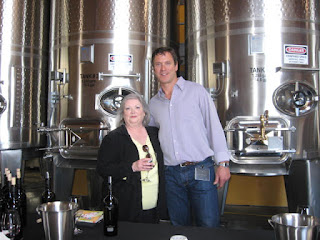 At first taste I knew the dark wine in my glass was going to be age worthy.  The nose was typical Walla Walla fruit with it's notes of rich earth, Autumn leaves, dark cherries with waves of cigar box.  Oh how I wished for a decanter, as I knew this wine was trying to tell me more than what it could being stifled in a glass. There was structure to the tannins, but harmonious allowing for the  dark fruit to show through.  Rich flavors of  cherries and plums were on the palate combined with a silky mouthfeel,  leaving a finish of cocoa and spice.  If possible, I would love to revisit this wine in another five years and of course, another five years after that - 10 years total.  If I know the Figgins style, this Cabernet will age gracefully.
So, as I refer back to the topic that had the locals buzzing about Drew leaving WSU at Pullman to latch onto a dream, that very few young men will ever realize.  I think Drew took the right path - and now with the realization of Doubleback, it is a path well taken.  I will be looking forward to future releases.
Posted by wild walla walla wine woman at 10:32 AM

No WAY! You hung out with Drew Bledsoe? That's cool! How's his wine? Adding some to my order? :)

Thanks guys for checking in! Joel, WAY! Proof is in the photo. I will work on getting you some Doubleback.

Joe, no problem about the Steelers. It just so happens we have them covered too in the Walla Walla wine industry. Dean Derby of Spring Valley Estate Vineyard played for the Steelers.
http://www.springvalleyvineyard.com/PDFS/SVV_NewsApril05.pdf