Live Wine Blogging is a favorite event amongst the wine bloggers and it is also an opportunity where winemakers are invited to show off their wines. At least eight wine bloggers are seated at table and will get to taste up to 12 wines poured by 12  winemakers and/or a reps of the winery. Each wine is given five minutes to be poured, hand-out tasting notes and for the winemaker to talk about his/her wine. Bloggers taste the wine while fast and furiously type up their notes live via social media platforms such as Twitter and Facebook. Often referred to as "Speed Dating" because of the ringing bell reminding the winemaker and the wine blogger their time is done. Once the bell rings, the winemaker will move on to the next table they are assigned, where once again they will romance a new group of wine bloggers. 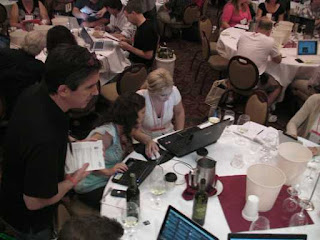 It has been such a popular event that  the organizers changed the one-time session into a two-session event at the Wine Bloggers Conference in Walla Walla.  Live Wine Blogging Friday for Whites and Rosés.  Live Wine Blogging Saturday for Red.
Plenty of dump buckets, fresh glasses and pitchers of water are provided at each table so bloggers can take care of their palates. This year in Walla Walla a large screen was provided so we could actually see the tweets live from Twitter.  What helps identify those tweets are each wine blogger is asked to add "#WBC10" to their tweets.
Critics have said there is no way a winery can measure if "speed dating" really works. It has also been suggested that this event is just another way for wine bloggers to drink free wine and get drunk.  I guess we are always going to have critics, and especially those critics who are the first to speak up about something they have not attended or seen for themselves. However, it is an opportunity for winemakers to reach out to a new group of at least 300 people that they may not had the opportunity to show off their wines before. If the wine blogger likes the wine they are tasting, more than likely they will  pay attention to the winery in the future.  And speaking for myself, when I attended WBC09 in California, I found some small boutique California wines that I will never forget and will continue to seek out.
Unfortunately, on Friday's "speed dating" I had a difficult time getting logged into the internet and when I finally did, I could not get into Twitter.  Must have been overload.  So, what do you do in a time like that?  Drink the wine, take hand notes and watch the Twitter results on the large screen.  A winery may not be able to measure the value of "speed dating," but I read several positive tweets regarding:  Caleb Foster of Buty Winery scored big with his blend of Sémillon, Sauvignon and Muscadelle. You don't see a lot of Muscadelle around, especially in Washington State. Gilles Nicault of Long Shadows Vintners' Poet's Leap Riesling received several tweets for, not only the generous aromas and the clean taste of citrus, but also the unique concept of the winery itself.  Dusted Valley's  Ramblin' Rosé, poured by Chad Johnson, was tweeted up a storm for the complexity of this "pretty in pink" wine. Cool and complex.  Pithy Little Wine Co. from San Luis Obispo, CA poured their Sangiovese Rosé. It was clean and bright with tastes of cherries and citrus.  I really took notice of this California Rosé.
On the Saturday's Live Wine Blogging for the red wines, thank goodness I was able to tweet up the Twitter.  I couldn't pay near as much attention to the large Twitter screen since I was busy contributing my own tweets to it, but again Long Shadows Vintners was on the board favorably for it's Sequel Syrah.  Tweets were "dooking" it out over the Velvet Glove Shiraz, with - - yes a velvet label, by MollyDooker wines from Australia.

This Shiraz is a wine you immediately decide you are not going  to like even before giving it a chance of a sip.  The labels from MollyDooker are over the top (They must be over compensating on the labels because the wine is either bad to mediocre).  MollyDooker wines are  over 15% alcohol (All you are going to taste is a hot finish). They use nitrogen gas to protect the wine during wine making, so they can use less sulfites (Clever marketing scheme).  So how did it taste?  Well, let's put it this way, I didn't dump it, instead I grabbed another glass for the next wine to be poured.  I wanted to savor the nose of  violet and coffee in the dark liquid of the Velvet Glove Shiraz. It seemed like a rich and thick chocolate in my mouth with flavors of black and blue berries. There was no hot finish, but more velvety layers of chocolate, coffee and bramble berries. I later found out the Velvet Glove is $185 a bottle. Do I have good taste or ...can be swayed by clever marketing?  No.  It was really all in the taste. A very plush wine.
Here is a list of some of the other wines that were featured during the Live Wine Blogging:
2008 Duck Pond Cellars Pinot Gris (Willamette Valley, OR)
2009 aMaurice Estate Viognier, "The Sparrow" (Walla Walla, WA)
NV Pepperwood Grove Chardonnay - Non vintage in a box (CA)
2009 Desert Wind Viognier (Wahluke Slope, WA)
2009 Big House White - interesting shaped box wine (CA)
2008 Maryhill Viognier (Columbia Valley, WA)
2008 Delille Cellars Chaleur Estate Blanc (Columbia Valley, WA)
2008 Hogue Genesis Riesling (Columbia Valley, WA)
2008 Solena Estate Pinot Noir (Willamette Valley, OR)
2007 Concannon Conservancy Petite Sirah (Livermore Valley, CA)
2006 Jordan Cabernet Sauvignon (Alexander Valley, CA)
2007 Maryhill Zinfandel (Columbia Valley, WA)
2008 Duck Pond Cellars Red Blend (Wahluke Slope, WA)
2007 Trio Vintners Riot Red Blend (Columbia Valley, WA)
2008 Ponzi Vineyards Tavola Pinot Noir (Willamette, OR)
2005 Nicholas Cole Cellars Camille Red Blend (Walla Walla, WA)
2008 CornerStone Cabernet Franc (Napa Valley, CA)
2007 Stoller Vineyards JV Estate Pinot Noir (Willamette, OR)
Posted by wild walla walla wine woman at 8:33 AM

Catie, I'm in agreement with you completely (and I loved the 'dooker too!) I actually "live" blogged and published the posts immediately after with iPhone photos too. I enjoy the challenge of trying to taste, type, and learn that much in such a brief time.

I know that Chris Watkins at Ridge's blog also published immediately and he got a lot more of his tasting notes up too that are worth checking out. I know I dumped and spit and I saw others doing that also.

Hey Predator,To survive a tasting like that, you have to dump and spit. There were some wines that with one sip told me exactly what I needed to know. At the WBC09 in Santa Rosa, they had staff that was moving fast, back and forth, dumping buckets of wine. However, they only had one bucket per table. This year the removal of the buckets was not as fast as they were a little more prepared with 2-3 buckets per table and what made the biggest impact, was that we split the one day event, into two days. Thanks for stopping by. C~

Sorry we didn't get a chance to talk more at the WBC. I'm glad I got the opportunity to pour for you during the live blogging session though.

We were proud to be a part of such a great event bringing together a cadre of incredibly talented people.

Hi Lisa!
Thanks for stopping by. In fact, Jordon is on my list of California wineries to keep an eye on. Happy to have you here in Walla Walla.
Cheers,
C~

Thanks! Please let me know if you're coming to visit. Would be great to see you in Sonoma County.
By the way, you can find the video diaries we recorded online at YouTube’s Wine Bloggers Channel.

Best,
Lisa Mattson
The Journey of Jordan: a wine and food video blog

Just to give you some feedback from wineries who poured, out of nine Live Wine Blogging wineries who have so far completed our sponsor survey, eight said they would do it again knowing what they now know. Pretty good response which shows the wineries thought the experience was worthwhile.