New Highway 12 in Walla Walla: Where Did the Wineries Go?

The old U.S. Highway 12 may be tucked, plucked, widened and realigned, but the new highway's "cosmetic surgery" is causing problems for wineries. There isn't going to be any GPS that will find these wineries for quite some time.  Where did they all go? 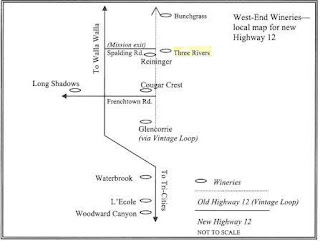 This new eight-miles of blacktop and intersections, that opened the week of June 21, is truly a good thing for our county.  It is something we have needed for many years.  U.S. Highway 12, from Burbank to Walla Walla, is a heavily traveled, two-lane highway with an average daily traffic count of up to 13,000 vehicles per day. Freight trucks account for approximately 33 percent of the traffic volume. Cargo volumes through this section of U.S. Highway 12 can reach 10.73 million tons per year. More Americans are killed on rural roads (like U.S. Highway 12) than crowded urban expressways, even though two-lane roads carry less traffic. Since 1991, U.S. Highway 12 from Burbank to Walla Walla has experienced 1,079 accidents, of which 414 were injury accidents that resulted in 30 deaths.
The good news is there are only 21-miles left to go to finish this project.  In the mean time, our most noticeable wineries that dozens of tourists pass everyday on that portion of old Highway 12 have been "lost." Wineries that are located on the now "old" two-lane highway that were dependent on tourism traffic headed into the city of Walla Walla, have now been by-passed without signage or any kind of redirection.  In the mean time; Bunchgrass, Cougar Crest, Glencorrie, Long Shadows Vintners, Skylite Cellars, Reininger, and Three Rivers are mostly affected.  L'Ecole No 41, Woodward Canyon, and Waterbrook are still on the map.  However, their locations are on the old highway just before the change and redirection to where the new highway begins (or ends if you are traveling west).  And wouldn't you know in the wisdom of it all, the new highway opened when we had over 300 visitors to attend the Wine Bloggers Conference held at the Marcus Whitman Hotel in Walla Walla.
Wineries were assured that the switch from the old highway to the new one wouldn't be made without proper signage and access, acknowledging that wineries are a vital piece to the state's economy as the trucks that are hauling goods on the highway.  Jim Kuntz, Port of Walla Walla executive director, said the bulk of funding, $42.5 million, came from state funds raised by a 9.5 cent a gallon gasoline tax approved by voters several years ago. Another $13.3 million came from federal funds and local contributions (including many wineries) totaled $160,000. And when you consider that 9.5 cent a gallon raise of gasoline tax was paid by many winery tourists on the west side of the state, it's time for the acknowledgment of these wineries and their existence.
"Opened two weeks ago to traffic, the new stretch of highway between Walla Walla and Frenchtown (Lowden) has not only taken away the drive-by traffic, it's cut off connections for those who were destined for the wineries in the first place" said Skylite Cellars owner Cheryl Hodgins, "The winery's weekend traffic has consequently been cut off from about 200 visitors to zero."
The access, especially to Skylite Cellars, along the old highway at 25 Campbell Road has been blocked to traffic traveling from the east and the west.  However, the connection from the new highway to the old portion has not been completed at this time. Vicki Hillhouse of the Walla Walla Union Bulletin contacted the Washington State Department of Transportation  and they commented they are working with the affected wineries to provide signage and redirect traffic to their businesses. WSDOT has also commented that the lack of access is expected to be temporary while these new connections are completed over the next two weeks.  Let's watch what happens in the next two weeks.
For further information:
Check out the map designed by Woodward Canyon.
Quote and more information from  Vicki Hillhouse at Walla Walla Union Bulletin
Posted by wild walla walla wine woman at 6:20 PM

Catie, love the new look! I'm frankly appalled that the change was made without making sure that the signage was in place to minimize the impact to local businesses. This is a travesty that hopefully will be fixed very, very quickly. Especially in this economy, having a weeks or months long decrease in business is more than significant.

I'm sure it will be a win in the long run as it will insure better access into town as well as a safer drive.

Catie, talk about being taken for a loop when we went to seek out these wineries! When we were in town for WBC, we visited Glencorrie Winery after getting directions from another winery. It devastated me to hear that we were their first visitor in days. I hope things get better sooner rather than later.