Malbec, malbec candlelight
Doin' the town and doin' it right
In the evenin'
It's pretty pleasin'
(With apologies to Muscrat Love sung by America)
Malbec has become one of those grapes that when I see it at a winery, I get very excited  and immediately have to taste.  This dark inky grape has a long history and known as one of the six grapes allowed in the blend of red Bordeaux wines.  These French vineyards are found in Cahors which is in the South West region of France.  Known as Malbec in Bordeaux, it is also referred to as Auxerrois or Côt Noir in Cahors and Pressac in other areas.
Unfortunately, Malbec lost its popularity  in Bordeaux when a  frost killed off 75% of the crop in 1956. It was later replanted, but as the acreage of Malbec was declining in France, in Argentina it was quite the opposite.  Malbec in Argentina became a  "national variety" and is identified now with Argentinian wines.  The success of Malbec in Argentina led some wine producers in neighboring Chile to try their hand at this unique varietal, as well. 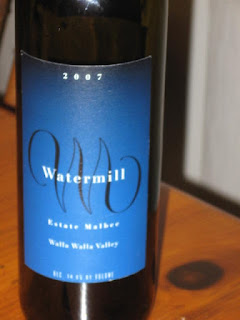 Trivia:  Did you know that the McClellan Family at Seven Hills Winery in Walla Walla planted the first Malbec vines in the area in the late 1990's at the Windrow Vineyard in the Walla Walla Valley AVA (located at OR/WA Border and now owned by Tero Estates Winery)?   Which brings me full circle from Malbec in Bordeaux back to the Walla Walla AVA at the OR/WA Border.
Watermill Winery, located at the old Watermill Building, is one of the first wineries in Milton-Freewater, Oregon and of course, located in the Walla Walla AVA.  This winery is no stranger to agriculture or to the area.  In the 1950's the Brown Family planted orchards and three generations later, they are producing premium apples, award winning cider and now award winning wines.  It's only a natural that one of their finest wines is a Malbec, considering the rich history of the vineyards they use for this exquisite dark and inky varietal.
Watermill Estate Malbec - 2007  started its roots at the McClellan Estate and Watermill Estate Vineyards.  The McClellan Estate vineyard, planted by the Brown family in 2003, sits adjacent to Seven Hills Vineyard and borders the acclaimed Windrow Vineyard.  And even more interesting is the Watermill Estate Vineyard, planted in 2006,  is located in the immediate vicinity of famed Cayuse Winery.  The site for this vineyard was selected due to the well drained and rocky soil.
Okay - okay, so how does it taste?  Well first of all, the nose made me very happy.  Laugh at me if you will, but to me a good Malbec must smell like grape jelly on graham crackers. It's that memory that takes me back to my childhood.  It was one of those childhood treats my grandmother would give us while spending time at the grandparents small farm on School Avenue in Walla Walla.  Of course, the grape jelly was never the commercial stuff, but made by my grandmother from the grapes she grew in her backyard - local Walla Walla fruit.
The wine filled my mouth with inky black liquid.  It was supple and full of dark brambleberries, ripe cherries, plums and espresso with notes of milk chocolate.  It was really quite a lucscious wine.  The tannins were visible, but didn't get in the way of the fruit.   There is a reason why it received a Double Gold at the 2010 Seattle Wine Awards.
So how would I pair the Watermill Estate Malbec?  Well, I would definitely look to Argentina for advice.  Pair it with spice!  Something "beefy" and spicy - from a grilled adobo flank steak with a fresh summer salad of tomatoes and grilled corn or even something simple like a carne asada taco - - or don't pair it at all.  Just pour a glass and enjoy it while revisiting old memories of grandma and grandpa's little farm ...

And they whirled and they twirled and they tangoed
Singin' and jingin' the jango
Floatin' like the heavens above
It looks like malbec love
Posted by wild walla walla wine woman at 12:14 PM